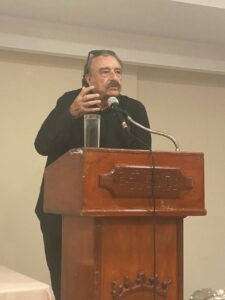 The achievements in health and science in Cuba, a system designed early by the leader of the Revolution, Fidel Castro, to serve the people, are also a world reference, said the former director of Le Monde Diplomatique before leaders of the National Trade Union Center of Panama.

In statements to Prensa Latina, the professor also praised the inter-institutional study that allowed Cuba to make five proposals, three of them already approved as vaccines (Soberana 02, Soberana Plus and Abdala), with which it immunized its population, thus avoiding further contagions and the loss of lives.

All these results, he remarked, are taking place amid the effects on key sectors such as tourism and culture, in a country suffering from a failed economic, commercial and financial blockade unfairly imposed by the United States for more than six decades.

Ramonet commented that in the last two years, the pandemic has plunged the world and the continent, which has not yet emerged from the financial debacle of 2008, into another huge crisis, with consequences for a region where 70 percent of the economy is informal, and where confinement has led to the disappearance or transformation of micro-enterprises.

Regarding the collapse of the healthcare system and funeral services, among others, the professor recalled scenes of apocalypse in Guayaquil, Ecuador, and the dozens of corpses in the streets, or the boom of contagions in the city of Manaus, Brazil, with a president like Jair Bolsonaro who dismissed the impact of the disease.

He also mentioned Peru, the country with the highest mortality rate in the world in relation to its population.

All governments, whatever their political stance, he said, were forced to design and implement policies to help families and businesses, as well as disbursing millions of dollars for the purchase of vaccines and other expenses to try to curb the spread of the SARS-CoV-2 coronavirus.

The situation brought with it further impoverishment of the population and high levels of overexpenditure and debt that led to popular revolts in Guatemala, Costa Rica, Colombia and Ecuador.

The governments with large debts and the inability to collect taxes make the population reject them.

From the electoral point of view, he argued, the socioeconomic situation affecting the population, the reduction of resources and the impact of the disease, which means higher inflation, make the people punish the incumbent governments at the ballot box.

We have seen changes in Costa Rica, Honduras, Peru and Chile. They are also expected in the next general elections in Brazil (May) and Colombia (October), he pointed out.

In other words, he summarized, in the Latin American context, the neoliberal governments and the right wing were not up to the challenge of a health crisis unleashed by Covid-19, they dismantled the State and health and education services, which showed their incapacity to manage the disease, insensitivity and lack of solidarity.