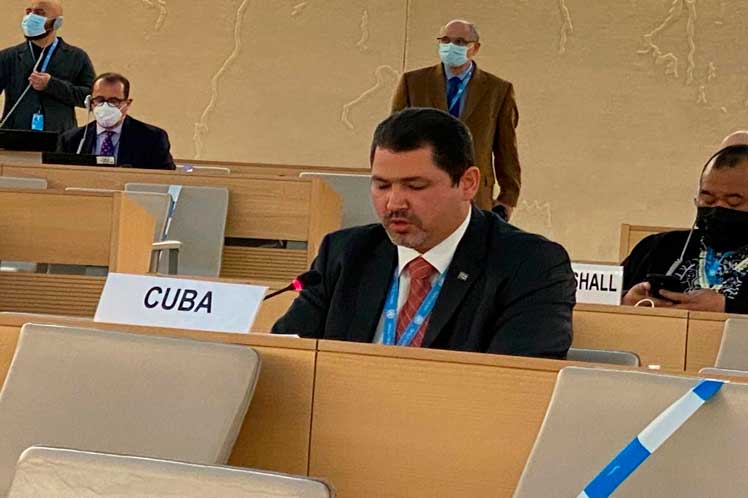 Geneva, Mar 4 (Prensa Latina) Ambassador to UN Geneva Juan Antonio Quintanilla reiterated today Cuba's condemnation of double standards and selectivity in the treatment of the issue of human rights, evidenced once again during the conflict in Ukraine.

The manipulation of the issue for political purposes is something we know well, because our country is a direct victim of these unacceptable practices, he warned at the Human Rights Council, where a resolution with a marked imbalance on the situation in Ukraine was approved.

The diplomat specified in the explanation of the abstention vote of the island that the Council has not been able to adopt resolutions in the face of serious facts such as extrajudicial executions, the imposition of unilateral coercive measures and criminal blockades against entire peoples, as well as the establishment of concentration camps and torture.

“This has not been allowed by many of those who today demand immediate action in the face of the events in Ukraine,” he stressed at the forum, which agreed by 32 votes in favor, two against and 13 abstentions to urgently create an independent commission to investigate what is happening in the conflict, considered in the text an aggression by Russia against its neighbor.

Quintanilla affirmed here that the document violates the basic principles of respectful dialogue, non-selectivity and non-politicization that should guide the work of the Council, due to its biased nature, as it attempts to assign responsibilities to only one of the parties involved (Russia).

Cuba will continue to advocate for a diplomatic solution to the current crisis in Europe by peaceful means, guaranteeing the security and sovereignty of all, the effective exercise of human rights, peace and regional and international security, he insisted.

Quintanilla ratified in the meeting Cuba’s commitment with the International Law and the UN Charter, which he considered core references for small countries against hegemonism, abuses of power and injustices.

“We defend peace in all circumstances and we oppose, without ambiguity, the use or threat of the use of force against any State. We are committed to international humanitarian law and call on all parties to protect the population, their property and civilian infrastructure,” he said.

In his speech, the diplomat added that as a matter of principle, Cuba shares the position of the Non-Aligned Movement against the imposition of resolutions and mandates against nations.

Real cooperation on human rights will never be achieved without the consent and commitment of the States concerned, Quintanilla said.