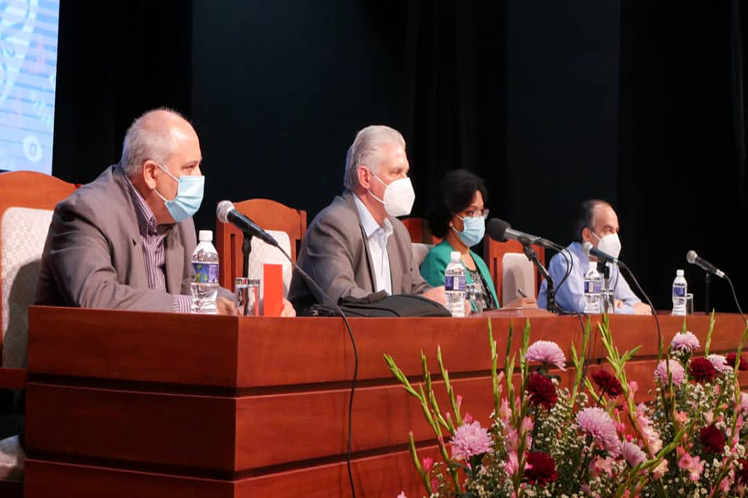 Havana, Mar 7 (Prensa Latina) Cuban President Miguel Díaz-Canel on Monday stressed that Cuba defends peace in all circumstances, as analyzing the Ukraine conflict during a meeting with artists and intellectuals.

In the annual balance meeting of the Ministry of Culture, the Cuban leader stated that his country is unambiguously opposed to the use of force against any State and is clear about value and principle of international laws as protection from unilateralism, imperialism and hegemonism.

As a small country we do understand it better for living besieged for over 60 years, under continuing threat, we have faced State terrorism, military aggression, bacteriological warfare, and a brutal blockade, said President Díaz-Canel.

The Cuban president reaffirmed his country firmly and consistently champions international law, the UN Charter and the Proclamation of Latin America and the Caribbean as a Peace Zone.

He explained such principles and laws have been firmly and consistently defended everywhere, while opposing to political manipulation and double standards.

Analyzing the Ukraine conflict, Díaz-Canel pointed out that it´s a serious matter, whose historical roots cannot be ignored, just as the conditions that have led to this conflict cannot be ignored.

This conflict could have been avoided whether Russia´s well-founded security guarantee claims in the face of the offensive military operation by the North Atlantic Treaty Organization (NATO), which has brought that country to an extreme situation, had been seriously and respectfully addressed.

The Cuban president warned that using economic, commercial and financial sanctions as instrument of pressure against any country does not solve the current crisis either, but rather adds fuel to the fire and worsens the international economic situation. He reaffirmed that Cuba will continue urging for a serious, constructive and realistic diplomatic solution to the present crisis in Europe, by peaceful means, guaranteeing security, sovereignty, peace, and stability.