Seeking to resume cultural exchange between Angola and Cuba 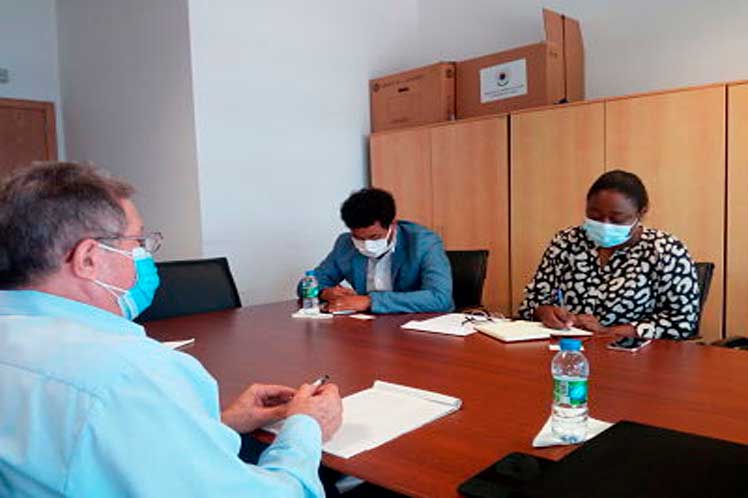 Seeking to resume cultural exchange between Angola and Cuba

The Angolan diplomat and the director of Exchange of the organism, Cecilia Silva Bernardo, agreed on the possibility of boosting collaboration, taking into account the progressive recovery of socio-economic activities in both countries due, to a great extent, to the massive vaccination campaigns against the pandemic.

According to Gonzalez, the containment of the epidemiological threat allowed the resumption of relevant activities with physical presence of delegates and public; thus, the Havana book fair, the Fihav commercial exchange, considered the most important in the Caribbean, and the international tourism event FITCuba 2022 will take place in the course of this year.

At this moment, he added, the 14th edition of the Havana Biennial is in session and from May 14 to 22 the Cubadisco International Music Fair will take place, whose calls have always been highly accepted by creators and directors from different parts of the world.

The official also explained the efforts of the Cuban State and people in the face of Covid-19, under singular restrictive conditions due to the effects of the economic, financial and commercial blockade of the U.S. government and the increase of Washington’s unilateral coercive measures against the island.

In addition to the possible links in the field of fine arts, Silva Bernando was also interested in issues related to tourism and the celebration of FitCuba 2022 in early May in the resort of Varadero.

According to her, Angolan tour operators and hoteliers could be interested in participating in the event, given the priority given by the government to the diversification of the national economy and the attraction of investments.

Speaking to Prensa Latina, Gonzalez recalled that contacts with several Angolan authorities follow up on the talks held here by Cuban Deputy Culture Minister Fernando Leon, who represented his country at the second Luanda Biennial-Pan-African Forum for the Culture of Peace, held in late 2021.

With a similar purpose, the counselor visited today the Polytechnic Institute of Arts (Cearte), the only institution of its kind in Angola, where he talked with the director and deputy director of the academic center, Eusébio Pinto and Nelson João Pereira, respectively.

Both Pinto and Pereira confirmed to Prensa Latina “the high expectations” of Cearte’s faculty regarding a probable resumption of direct links with Cuban professionals, who could be of great help, especially in the methodological field.