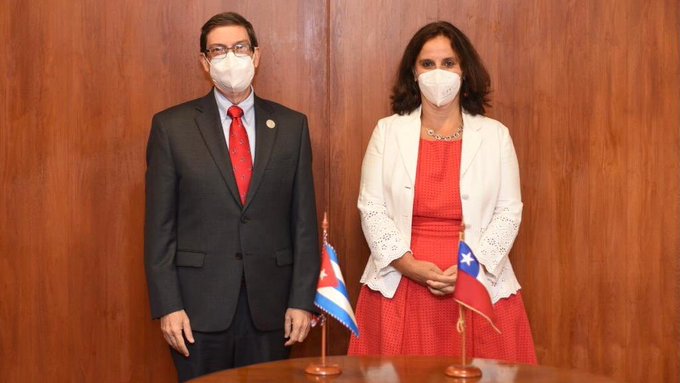 The diplomat greeted the new minister, wishing her success in her mandate and extended congratulations to Boric, who this Friday became the youngest person to assume the Presidency in Chile, according to the Cuban Foreign Ministry in a message on Twitter.

Rodríguez led the Cuban delegation that attended the inauguration of the representative of Apruebo Dignidad coalition, before whom the members of his government team were also sworn in, with a strong female presence.

Siches became the first woman in Chilean history to hold the Ministry of the Interior and Public Security.

During his stay in Chile, the Cuban foreign minister met this Thursday with María Begoña, designated Minister of Health, with whom he exchanged experiences of the Caribbean nation in this sector.

In addition, he met with the head of Science, Technology, Knowledge and Innovation of Chile, Flavio Andrés Salazar, and both parties expressed their common interest in expanding cooperation links in correspondence with mutual potentialities.

On that day, the Cuban foreign minister also held a meeting with Antonia Urrejola, who will assume the direction of foreign policy of the South American nation in the new government, to whom he confirmed the will to deepen bilateral relations and cooperation.

Upon his arrival on Chilean soil, Rodríguez reaffirmed the purpose of promoting the developing the historical ties that unite both nations.

This will was confirmed in December of last year when the Cuban president, Miguel Díaz-Canel, congratulated Boric, an event that he described as a historic popular victory.