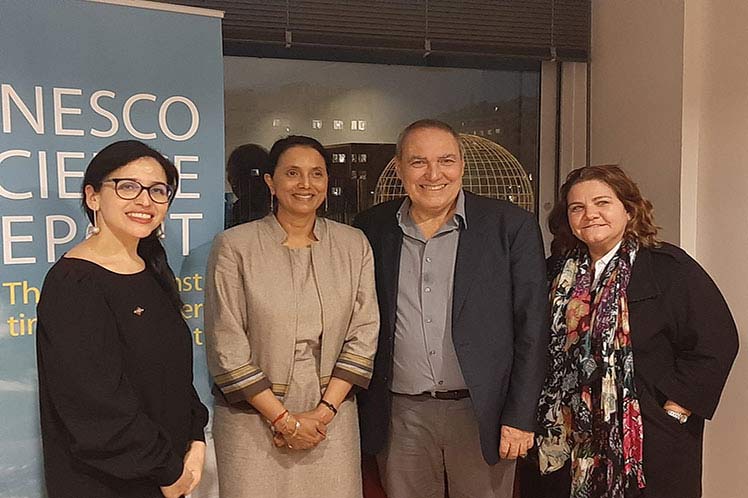 Paris, March 15 (Prensa Latina) Cuba and UNESCO reaffirmed today their willingness to strengthen their cooperation in science, during the visit to the organization by the director general of the island's Finlay Institute of Vaccines, Vicente Vérez.

The leader of the Sovereign vaccine project against Covid-19 and the director of Research of the Cuban institution itself, Dagmar García, were received by deputy director of UNESCO for Exact and Natural Sciences, Shamila Nair-Bedouelle, who recognized the work of the Antillean nation in the sector.

The interlocutors also addressed the spaces for exchange and collaboration between the multilateral entity and the Finlay Vaccine Institute, in areas such as Category 2 centers, which are poles that bring together international or regional experts and provide technical assistance and services.

Vérez and García were accompanied by the island’s ambassador to UNESCO, Yahima Esquivel, in a meeting in which participants also highlighted the importance of the Carlos J. Finlay UNESCO-Cuba Award for Microbiology.

The biennial award that commemorates the Cuban doctor known for his discoveries on the transmission of yellow fever was approved in 1977 to recognize people and institutions with relevant contributions in the field of Microbiology, including Immunology, Molecular Biology, Genetics and related areas.

In the context of the meeting, Ambassador Esquivel highlighted the Caribbean country’s commitment to the United Nations organization specializing in education, science and culture, which Cuba joined 75 years ago.

In recent days, Cuban scientists have developed an intense agenda in Italy and France, in that order, where they shared efforts and experiences for the creation of vaccines against Covid-19 Sovereign 01, Sovereign Plus and Sovereign 02, the latter unique in the world developed to protect children between the ages of two and five.