Cuban President meets with delegates of the Patria Colloquium 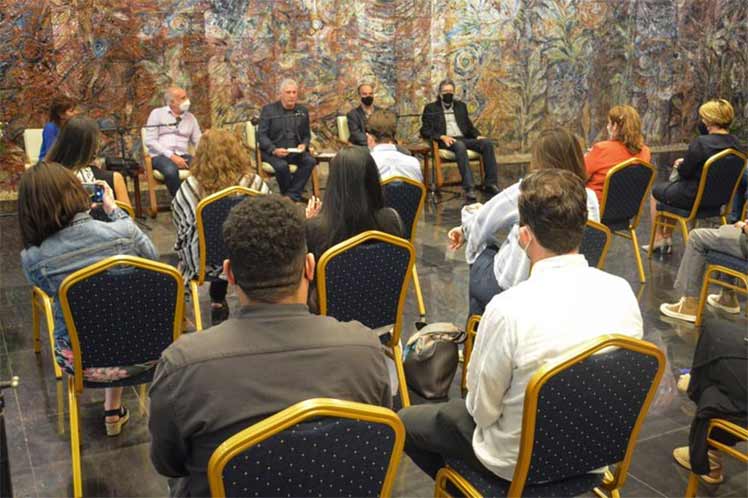 Cuban President meets with delegates of the Patria Colloquium

According to the Twitter account of the Presidency, the head of state received delegates from eight countries who attended the meeting at the Palace of the Revolution, in an exchange that served as a pretext to thank “their work in defense of the truth and from Cuba”.

“Receive our admiration, respect and affection,” Díaz-Canel told those who accompanied the analyzes in Havana regarding social networks, the manipulation of opinions by the hegemonic media and the need to build effective digital platforms to defend the worthy causes of Latin America and the world.

Diaz-Canel spoke to journalists, influencers and communication experts about the Cuban reality, the intensification of the economic blockade imposed by the United States, the confrontation with the Covid-19 pandemic in the Antillean nation and the development of its own immunogens, reported the Presidency on Twitter.

“May the virtual world, with people like you, be better and better, may hate not predominate, may be moved by love, by humanism, by solidarity. I only ask that we unite all possible efforts,” urged the president.

In addition, he assured those present that their contribution and criticism is required, since “we are not a perfect society”, but the articulation against imperial hegemony is also urgent, “to make a better world possible, real and virtual”.

The final declaration of the event ratified the commitment to the island that suffers from Washington’s harassment, and recalled that his policy translates into measures of economic suffocation and media siege aimed at destabilizing internal order.

He also added that the upsurge in aggression occurs in the midst of a global crisis and the decline of the hegemony of the northern nation, examples of which are the chaotic withdrawal from Afghanistan and the current war in Ukraine.

In the midst of this scenario, Cuba remains standing in search of new answers and with its doors open to friends, he pointed to the document signed by delegates from Argentina, Brazil, Mexico, Venezuela, Spain, Lebanon and the United States.

The contest took place in the context of the celebrations for the 130th anniversary of the founding of the Patria newspaper, the official organ of the Cuban Revolutionary Party led by José Martí, whose historical imprint is recognized by the more than 100 invited communicators.