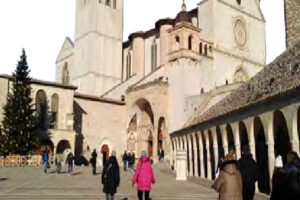 The city, with some 25 thousand inhabitants, is part of the complex “Assisi, Saint Francis Basilica and other Franciscan sites,” recognized by the United Nations Educational, Scientific and Cultural Organization as a World Heritage site due to its exceptional historic, artistic and architectural values, in a beautiful natural atmosphere and with Roman and Medieval roots.

A unique site in the world by the continuity between city-sanctuary up to the present, represented in the cultural landscape, religious complexes, communication systems and the traditional use of the land, the international entity recognized.

Although archeological findings reveal that humans have been in the current area since the Neolithic, with settlements erected between the 9th and 8th centuries B.C., Assisi gained momentum as an economic and social center of the Roman Empire when it became a municipality in the year 89, prior to the birth of Jesus.

The city walls, the forum (currently known as Piazza del Comune), a theater, an amphitheater and the Minerva temple (currently turned into the Santa Maria Church over Minerva) show Roman vestiges in the site.

Saint Francis (1181-1226) was born there, he was the founder of the religious Franciscan Order, to whom the Sanctuary around which the city’s life is developed was dedicated in 1253 and whose remains rest in a crypt.

It is said that the building was designed by Elias, one of his disciples, conceived in two sections: the lower and dark basilica, and the higher, spacious and luminous one, contrasts that symbolizes lives in penance and glory.

The Pope at the time, Gregory IX, laid the first stone to build the church on July 16, 1228, a day after Italy’s Patron Saint, who chose to be buried in Assisi’s lower hill, was sanctified. The legend has it that executions took place there and wrongdoers were buried, reason for which the temple was built in the place.

Thirteenth century paintings, attributed to Cimabue, Pietro Lorenzetti, Simone Martini and Giotto, depicting the saint’s life, along with the basilica itself that houses them, are considered medieval art masterpieces, turning this city into a reference for the development of arts and architecture in Italy and Europe.

Every year Assisi welcomes millions of pilgrims and tourists from all over the world for its religious attraction, venue of the Franciscan spirits, interreligious and ecumenical dialogue.

The current Pope, Jorge Mario Bergoglio, is the only one of all 266 pontiffs of the Catholic Church to assume the name Francis upon his election.