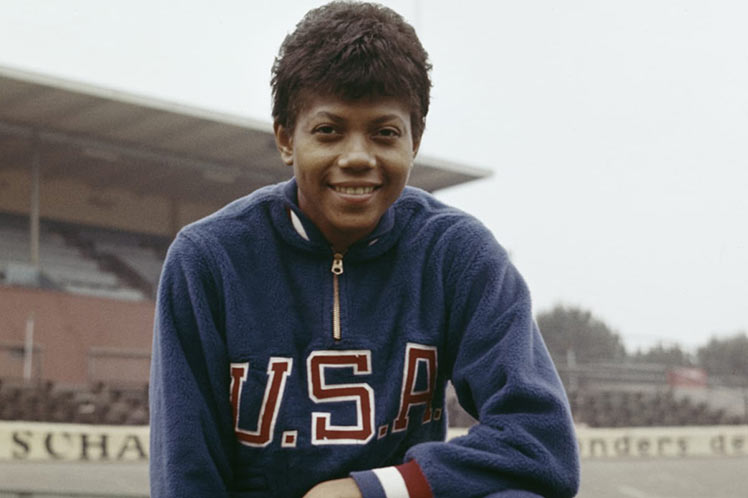 At the Rome 1960 Olympic Games, she achieved something unprecedented, as she was the first US athlete to win three gold medals.

She was undefeatable in 100 and 200 meters and part of the 4X100 relay gold medal team. Likewise, she also set world records in the three events. According to experts, even today she is still considered one of the main influences for black US athletes in sport.

Born in Marksville, Tennessee, on June 23, 1940, Rudolph came into the world as the 20th child in a poor family of 21 siblings, and in her childhood she had serious health problems, including polio, which paralyzed her leg for several years.

Later, however, as a student, she got involved in basketball and races, sports in which she did not do badly.

The 1956 Melbourne Olympic Games arrived and the athlete qualified in the national team for the 200 meters, but was eliminated in Australia in her heat. She did get a bronze medal in the 4X100m relay.

She became a mother in 1958 and two years later competed in Rome, where she achieved the above mentioned feat.

In 1961 she equaled the world record for 100meters flat with 11.3 seconds and broke it later with 11.2 seconds to become the fastest woman in the world.

Literature about her highlights: “Very active in protests to end racial segregation laws, at the end of her sports career she decided to finish her studies and work with young people in big city ghettos.”

And it adds that “for that reason, she participated in Operation Champion, aimed at promoting the practice of sports among young people who had no choice but to federate and later set up her own foundation, which was dedicated to offering free training and organizing competitions among the most needy.”

Wilma passed away in Brentwood, Tennessee;she was defeated by a brain tumor on November 12, 1994 at the age of 54.

Tributes to the gazelle include a street and statue named after her in the city of Clarksville in her home state. In 1996 the Women’s Sports Foundation created the Wilma Rudolph Courage Award and there is another prize for women wrestlers that also honors her.