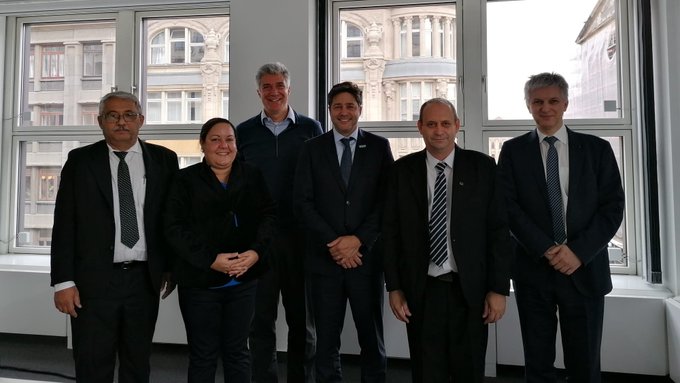 The head of this branch catalogUed the cordial exchange on his Twitter account and pointed out that the businessmen showed willingness to resume negotiations with the Caribbean nation to advance along these lines.

Arronte participates in Germany in the Dialogue on Energy Transition, a scenario that allowed him to meet with the president of the Commission for Economy and Energy of the German Parliament, Klaus Ernst.

Similarly, the day before, he spoke with Dr. Ajay Mathur, general director of the International Solar Alliance, about the projection of the island on the development of renewable energy sources (RES).

In this sense, his meetings with the president of the German Federation of Renewable Energies, Simone Peter, and with the general director of the International Renewable Energy Agency (Irena), Francesco La Camera, on joint projects in this field stand out.

In particular, Irena promised to provide financial support to the Caribbean nation for the construction of photovoltaic parks that will generate 15 megawatts (MW).

The Cuban government seeks to strengthen variants, especially sustainable ones, to solve energy problems in the face of clean mechanisms such as solar and wind sources.

The country has the aspiration of reaching 2030 with 37 percent of the energy generated from RES, for which it needs to advance quickly in its programs, as ratified by the most recent meeting of the Council of Ministers.

At the work meeting and after the Minister of Energy and Mines rendered an account, Prime Minister, Manuel Marrero, called to move to another stage in the development of this field, according to what local newspaper Granma published on Wednesday.

“We need to speed up the transition to cleaner energies,” the head of government remarked, adding there are companies that have many resources and can go further, based on the experience of the Mariel Special Development Zone.