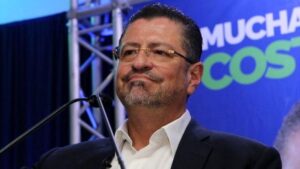 Juan Ignacio Perez, president of the Costa Rican Chamber of the Food Industry, pointed out that the immediate challenges are in the generation of employment, and the recovery of the confidence of consumers and companies of all sizes.

Jose Alvaro Jenkins, president of the Costa Rican Union of Chambers and Associations of the Private Business Sector, emphasized the desire to work together to recover the north and generate the virtuous circles of growth the country needs; having social talks as a fundamental instrument to reach agreements.

Silvia Bolaños, executive director of the National Chamber of Transportation, assured that she will ask the new president for an open talk, as he stated in his speech with all sectors, and expressed the willingness to collaborate and move forward with the country’s tasks and challenges.

Albino Vargas, general secretary of the National Association of Public and Private Employees, assured to be ready to talk and he mentioned, among the priority issues, the high interest payment of the public debt, the marked emphasis of the economic backwardness of the social exclusion in the coastal areas and the control of tax evasion.

Julio Castilla, president of the Costa Rican Chamber of Commerce, pointed out that as they account for 26 percent of the country’s business sector and 17 percent of employment, they prepared a 30-proposal document divided into six strategic axes on how we can generate more employment for families.