Cuba has policies to mitigate environmental dangers in human health 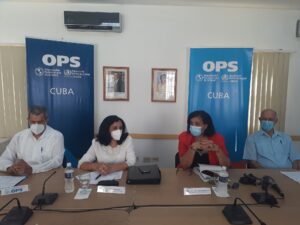 Cuba has policies to mitigate environmental dangers in human health

This was testified by Dr. Ileana Morales, national director of Science and Technological Innovation of the Ministry of Public Health, who revealed that the Life Task, for example, is a state plan to confront climate change whose precepts include health well-being.

Regarding the start of a day for World Health Day, to be held on April 7, the official explained that the actions of said program influence aspects such as environmental health, epidemiology, vector control, science and technological innovation , medical teaching, communication and investments.

Cuba, she said, is also inserted in the One Health project as part of the national health strategy for sustainable development.

Its objective, he said, lies in strengthening the integration and harmonization of systems that ensure the health of people, animals and plants, in the face of possible global dangers, with a view to enhancing responses to emergencies as well as the prevention and control of diseases and risks.

The One Health project emphasizes epidemiological surveillance, especially that related to antimicrobial resistance and integration between the sectors involved for diagnostic systems, she pointed out.

During the meeting with the press, held at the headquarters of the Pan American and World Health Organization (PAHO/WHO) in the Caribbean nation, Odalys Goicochea, director of the Ministry of Science, Technology and Environment, also spoke.

According to the official, in the Greater Antilles, actions are prioritized that reduce or eliminate the effects of pollution on natural resources, mainly on land and sea waters, the atmosphere and the soil, and on the ecosystems of hydrographic basins, bays and mountainous areas.

For this reason, she argued, policies are adopted for the management of residues and hazardous waste while measures that contribute to the protection and rational use of biological diversity and natural resources are intensified.

She also added that work is being done on the design of an environmental quality index for the country.

World Health Day is celebrated every April 7 to commemorate the anniversary of the creation of the World Health Organization which occurred in 1948.

Through its Our Planet, Our Health campaign, on this occasion PAHO/WHO calls on governments, organizations, and citizens to share the actions being taken to protect the planet, mitigate the climate crisis, and protect well-being human.