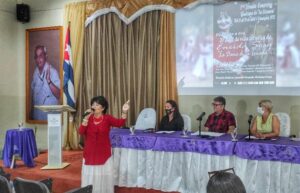 In this city, ‘representative of the greatest traditions in defense of Cuban nationality, the event that includes artistic shows and theoretical debates, the Provincial Council of Music and Shows pays tribute also to the centennial of poet Jesús Orta Ruíz, known as “Nabori Indian”, and other protagonists in the rescue of important cultural manifestations.

Fernando Medrano, director of the Camagua folklore group, and head of the program, stated the idea is to keep the event alive, “so that all that is valuable in peasant music is not lost to the young generations, and also lays the foundation for this in Camagüey, a Casa de la Décima”.

The most extensive region of Cuba, with a wide culture linked to livestock and musical traditions of the countryside, is preparing for this opportunity conferences such as the one that will be presented by the researcher Sonia Pérez, in charge of “The Cuban point, bulwark of our identity”.

In the press conference itself, the musicologist also brought a message about the importance for the national culture of the various melodic rhythms cultivated by the peasants.

“Thus we have the Changüí, the Son, and everything representative of our traditions, so it is a duty as well as a pleasure, for all the artists representing this music, to vindicate them”.

Theoreticians, among which Eneida Sosa, María Victoria Rodríguez, Tony Iznaga (El jilguerito), Luis Paz and Emiliano Sardiñas stand out among the guests, participants in the programming of peasant “guateques”, where in addition the culinary demonstrations with Creole meals , repentismo and Mexican songs are included.

Important cultural squares such as the Teatro Principal, located in the Historic Center of the city, a World Heritage Site, will host shows until the next day, the 24th, in the First Campesino Day “Guateque de la Llanura”, in a call to revitalize the most genuine of the customs and musical traditions of the Caribbean country.

Since December 2017, Cuban culture has celebrated the declaration of Punto Cubano as Intangible Cultural Heritage of Humanity, a musical manifestation performed with string instruments, and which has been enriched over the years with other rhythms born in Cuba such as guaracha and son. .