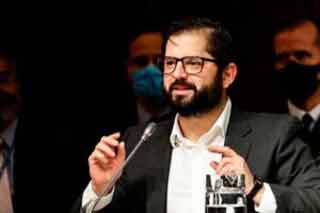 “With our Latin American brothers, we are going to work to face the climate crisis caused by the action of man with criteria of climate justice,” said the president in the opening speech of the first summit of the Escazú Agreement, based in this capital.

He pointed out that cooperation goes beyond individual responsibility and the political discourse of each country.

For Boric, the challenge is summed up to work together, or to perish as a result of individual efforts without any chance of success in the face of environmental deterioration.

“(…) Either we save ourselves together or we sink separately, and I believe that the Escazú agreement points to the idea of ​​saving us together, of working together,” he emphasized in his speech.

The Regional Agreement on Access to Information, Public Participation and Access to Justice in Environmental Matters in Latin America and the Caribbean, known as Escazú, is a treaty whose objective is the protection of those who work for the defense and conservation of the environment.

We know that there is no environmental justice, he pointed out, without guarantees for the protection and work of environmental defenders, who “live firsthand how the devastation of systems negatively affects the life systems of entire communities.”

Chile promoted the treaty in its beginnings, but the second administration of President Sebastián Piñera (2018-2022) did not ratify the Agreement, which had to wait until March, when Boric signed a bill to validate the country’s participation and waits for the approval of the National Congress (bicameral parliament).

Therefore, the South American country only participates in the summit as host and observer, roles that the president hopes will change soon with the conversion to a state party.

The meeting in Santiago de Chile will be in session until next Friday at the headquarters of the Economic Commission for Latin America and the Caribbean, with the aim of reviewing the financial measures for the implementation of the pact, its operation and strategies.