Iran and Cuba consolidate will to promote economic relations 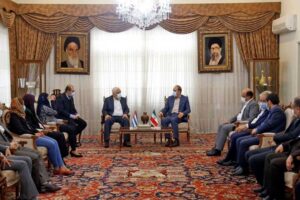 Iran and Cuba consolidate will to promote economic relations

“We want to take advantage of the capacities of the Eastern Azerbaijan province to supply raw materials,” emphasized the Cuban ambassador here, Alberto González, after a meeting with the governor of said Iranian territory in Tabriz.

The Caribbean diplomat stressed that the economic and commercial cooperation between the two republics will be further expanded and expressed his firm determination to establish the Iran-Cuba flights, without anticipating which airline would assume that commercial route.

He highlighted the holding of an exhibition stand with Iranian products and the attraction of Persian investments for joint projects that are on his work agenda, hoping to strengthen bilateral cooperation in various fields.

González remarked that his country chose Iran as a “commercial partner” due to the feeling of brotherhood and the capabilities of both countries, based on the words of the Persian president, Ebrahim Raisi.

According to Raisi, commercial relations between the two states must be developed on an equal footing with excellent political relations, and that is the best way to demonstrate the failure of sanctions instead of bilateral unity and cooperation.

Cuba in recent years has received the impact of the economic sanctions of the United States, the coronavirus pandemic and climate change, when the country needs raw materials to meet its needs in various productive sectors, González said.

He likewise referred to the production of the Covid-19 vaccine, developed jointly between the two nations, focusing on the event as a bilateral cooperation that can be expanded to other pharmaceutical fields.

Previously, the president of the Iranian Chamber of Commerce, Industries, Mines and Agriculture, Gholam-Hossein Shafei, held a meeting with the Cuban diplomat, in which both agreed on the need to advance actions.

The parties expressed their willingness to promote new initiatives to consolidate economic and cooperation relations on issues of mutual interest between the two countries.

In more than four decades of diplomatic relations, Havana and Tehran consolidated important achievements in terms of political coordination and exchange in dissimilar areas of interest, in particular the transfer of Cuban biotechnological products.

Cuba was one of the first countries to recognize the Islamic Revolution in Iran and since then both states have maintained relations, made diplomatically official since August 8, 1979, and sustained uninterrupted until the present.