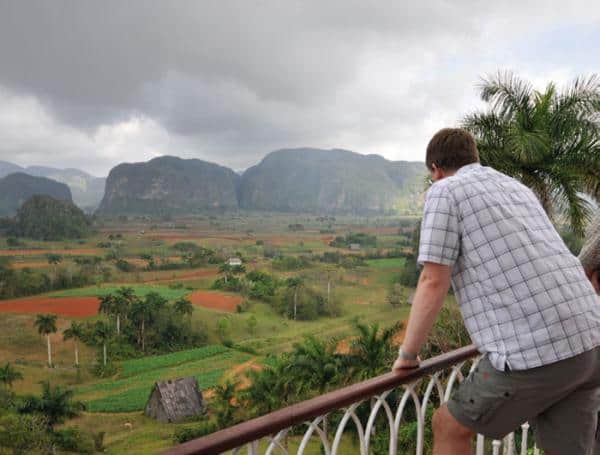 The site, revered in canvases by famous artists, was erected in order to appreciate the charms of the mogotes or elevations with rounded tops, dating from the Jurassic period, and at whose base curious vestiges of the past still emerge, such as ammonite fossils , mollusk disappeared about 75 million years ago.

In addition to verifying the beauty of the area, declared a Cultural Landscape of Humanity, newcomers can now enjoy a true show of living statues, which interpret characters from the area, considered one of the oldest lands in the Caribbean.

The typical peasant or peasant from Viñalero, a baseball player, the fruit vendor and the peanut vendor accompanied by roasted peanut cones, stand out among the magicians of disguise and patience, who pose for hours with the beautiful Viñales Valley as a “backdrop”.

A proud photographer of his old camera also stands out within the group of actors, who dedicate part of the day to preparing their attire and makeup to remain inert for several hours, before the astonished gaze of locals and visitors.

Turkish, Spanish, French tourists visit the viewpoint where they usually buy souvenirs of their walk through the area -inscribed on the World Heritage List due to the almost poetic symbiosis between man and the environment- assured Prensa Latina one of the workers of the place that sells books and different souvenirs.

Along with the famous mogotes, practically unparalleled in the world, the Viñales Valley treasures centuries-old agricultural practices, such as tobacco cultivation, and artistic practices.

Country tunes of Canarian origin, among which the guajiro stitch stands out, and knowledge related to the making of baskets with vegetable fibers, are some of the relics of the territory, belonging to the western province of Pinar del Río and distant about 160 kilometers from La Havana.

Competing with the monument erected in honor of Domingo Ramos, known as the painter of the valley, the living statues add charm to the unique window onto the surrounding elevations and bohíos (rustic wooden houses), where tobacco growers naturally dry the leaves after each harvest.

This expressive aspect, whose origins are associated with the ancient Greek and Egyptian civilizations, is fashionable in many modern cities, but in Viñales it is an exhibition that began relatively recently.

In this environment, the static characters seduce with no attributes other than the body itself, retouched with dyes and, in some cases, adorned with ancient costumes and masks.