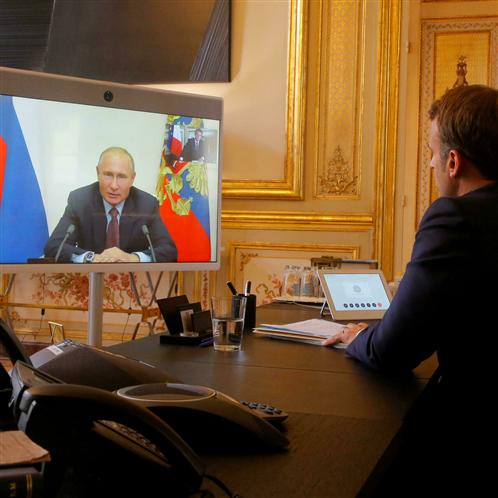 It seems difficult to understand that along with the efforts to stop the hostilities and the suffering of the Ukrainian civilian population, the bloc, precisely under the rotating presidency of the Council by France, indicates its intention to escalate the anti-Russian crusade, despite which clearly has not yielded results.

According to the French version of the talks, at least the eighth between the leaders since the beginning of the Russian military operation in Ukraine, on February 24, Macron urged Putin to “allow the evacuation of the Azovstal steel plant in Mariupol.”

Likewise, the French head of state would have requested a ceasefire along with him, a request that contrasts with the decision of the West, including Paris, to supply modern weapons to the government of Volodymyr Zelensky.

For his part, the Kremlin reported that Putin commented to his interlocutor on the need for the West to exert an influence on Zelensky favorable to the solution of the crisis and to stop the supply of weapons.

He also drew attention to the lack of awareness by EU member states of crimes committed by Ukrainian forces against civilians in Donbass, where Moscow recognized the independence of the self-proclaimed republics of Donetsk and Lugansk. On the same day as this new edition of the Macron-Putin telephone dialogue, the EU’s High Representative for Foreign Affairs and Security Policy, Josep Borrell, announced that the bloc is preparing new sanctions against Russia, including the limitation of oil imports .

Borrell also mentioned the addition of other Russian banks to the list of institutions excluded from the Swift system, an international financial communications network.

Hundreds of sanctions have not deflected Moscow from its stated goal at the end of February of ensuring the safety of the Donbass population and “denazifying” its neighbor.

Russia also brandished its security demands, in the face of NATO’s expansion into Eastern Europe, this time with Ukraine as the spearhead.

Peace seems distant, despite the demands of the UN and its Secretary General, António Guterres, in the midst of the West’s efforts to arm Ukraine, whose population suffers the consequences of the lack of will to stop a conflict that perhaps could be avoided.