Cuba demands return of territory occupied by illegal US base 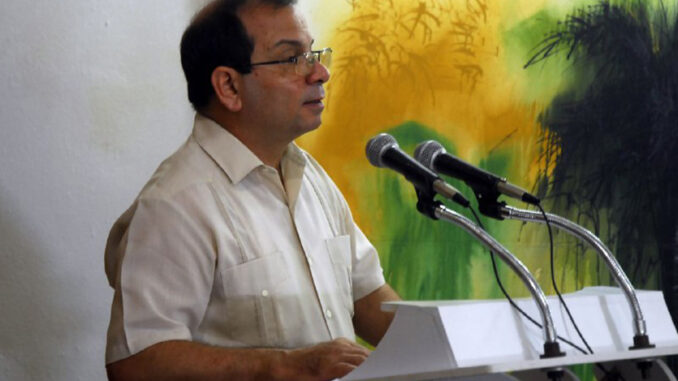 Cuba demands return of territory occupied by illegal US base

When inaugurating in this city the 7th International Seminar for Peace and for the Abolition of Foreign Military Bases, the also Hero of the Republic denounced this installation in the eastern end of Cuba is used by Washington to supply logistical means to the US fleet.

Similarly, he recalled that the enclave constitutes a point for the invasion of other Latin American countries and regions, according to the ICAP web portal.

For this reason, the president of the Institute expressed the claim of the Cuban people to respect the Charter of the United Nations and “the return of the occupied lands, to their legitimate owners” since 1903.

Also during his intervention, González advocated for peace on the planet and thanked the shows of solidarity with the largest island of the Antilles.

During the activity, the president of the World Peace Council (CMP), María do Socorro Gomes, expressed her condemnation of foreign usurpation of Caribbean territory and condemned the role of the North Atlantic Treaty Organization (NATO) as a trigger for wars.

The 7th International Seminar began on this day and will be in session until tomorrow with the participation of members of peace and solidarity organizations, as well as anti-war personalities from twenty countries.

The event, sponsored by ICAP and the CMP, will include around 19 presentations by representatives of Colombia, Mexico, Argentina, the International Committee for Peace, Justice and Dignity of Peoples, the European Left Party and other progressive movements. .

The delegates will also visit the town of Caimanera, in the extreme east, where they will be able to see the United States naval base located in Guantánamo against the will of the people and the Government of Cuba.

After the forum, next Friday the Caribbean America Regional Meeting of the CMP will take place, in preparation for the XXII World Assembly of the organization, scheduled for August this year in Vietnam.

According to lawyer Thomas Wilner, Washington violates the law by keeping its military enclave in Caribbean territory, since it has inmates without criminal charges and lacks justified reasons to maintain a deployment of guards in that area.