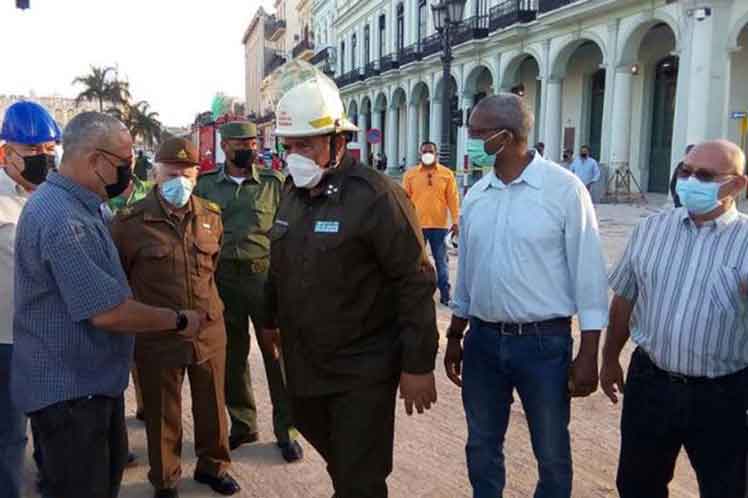 According to local media, Joel Queipo, a member of the Secretariat of the Central Committee of the Communist Party of Cuba (PCC); Commander of the Revolution Ramiro Valdes and the highest authorities of the Government and the party in the capital arrived at the scene of the accident.

During a meeting of the Temporary Working Group held this morning, it was learned that the number of fatalities amounts to 26, including four children and a pregnant woman, while 64 people are hospitalized and eight were discharged.

Havana PCC First Secretary Luis Antonio Torres Iribar said that there is still work to be done in the basement and in the intermediate zone with other buildings, where people may be found under the rubble.

He added that hospitals have a list of missing persons for identification and there are names of those who were in the Saratoga Hotel, but there may be bystanders at the time of the explosion.

The party leader said that 37 families from the buildings adjacent to the hotel, which underwent serious damage, have been evacuated, while two persons remain missing.

Havana Vice Governor Yanet Hernandez explained at the meeting that the families of the deceased are cared for and the children of the affected school are visited, while ensuring the return to classes.

Present at the meeting were National People’s Power Assembly President Esteban Lazo, who showed interest in the psychological assistance provided to children, for which he learned that four psychologists and the same number of psychopedagogues will be permanently in the schools where they will attend classes starting Monday.

The explosion at the Saratoga, an emblematic tourist space in Havana, occurred as a tanker truck laden with liquefied gas was serving the facility.

The hospitals in the province have taken care of the wounded, while several healthcare institutions received thousands of people who came to donate blood.