Sixth Summit of the Americas, not without Cuba 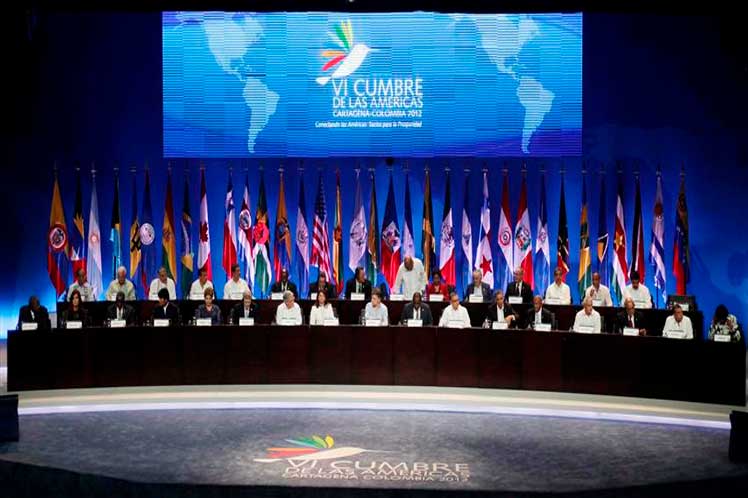 Sixth Summit of the Americas, not without Cuba

Havana, Jun 2 (Prensa Latina) We are amid a civilization challenge and that is why we want that the single-star flag is with us, Uruguayan President Jose Mujica said about Cuba at the 6th Summit of the Americas.

The heads of State and Government resumed the theme of progress in the continent in the Colombian city of Cartagena de Indias on April 14-15, 2012.

They reiterated that to achieve it, the hemispheric meetings should act as a space for talks without exclusions and with the participation of all countries on an equal footing.

Since March 7 of that year, the Cuban Government knew that it would not attend the hemispheric meeting.

Colombia’s President Juan Manuel Santos himself announced during his visit to Havana, in a very respectful and cordial manner, the mismatched consensus of the region to invite Cuba to the Summit, which ended without a final declaration.

In the central words of his speech, Santos mentioned that the non-presence of the Cuban delegation was a creative obstacle.

The elimination of Cuba by the US Government from the debates on poverty and inequality, citizen security, the fight against natural disasters, access to and use of technologies and the physical integration of the Americas, caused strong debates that began at the previous Summit.

However, “there has been no surprise. It has been the chronicle of an exclusion foretold,” Foreign Minister Bruno Rodriguez said from Havana.

He added that the United States, with such attitude, contempt and arrogance, offends the dignity of the Greater Homeland (Latin America) by Simon Bolivar, of Our America, by Jose Marti.

As a sign of protest for the absence of the Caribbean nation, Ecuador’s President Rafael Correa decided that his country would not attend Cartagena de Indias; Bolivia’s Head of State Evo Morales left the hall when he delivered his speech; and Venezuela’s Foreign Minister Nicolas Maduro did so.

Meanwhile, the United States named what happened as “the failure of Cartagena.”

During those days of debates on immediate issues for the continent, Antigua and Barbuda’s Prime Minister Baldwin Spencer made a call that included the Caribbean Community, so that it requested the US Government to put an end to the economic, financial and commercial blockade policy against the Cuban people.

The 6th Summit of the Americas made clear that the Latin American countries belong to a common homeland, with a history to which Mujica defined as “a cry of pain, but it is a cry of self-dependence. The ones with the others.”