Mexico considers Cuba´s exclusion from the Summit as a mistake 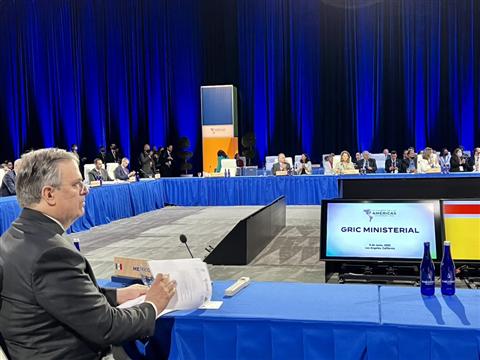 Mexico considers Cuba´s exclusion from the Summit as a mistake

Mexico City, Jun 8 (Prensa Latina) It´s a too serious mistake to exclude Cuba and other regional nations from the Summit of the Americas, the Mexican Foreign Secretary Marcelo Ebrard stressed on Wednesday, while calling for the reestablishment of the Inter-American order.

During his speech, Mr. Ebrard insisted no country should be excluded from this Summit, which belongs to the Americas, as its own logo recognizes and where Cuba, Venezuela and Nicaragua are included to. He repeated, we consider it is a too serious mistake because no one has right to exclude anyone.

We do not accept the principle of intervention to unilaterally define who comes and who does not come to these events, Mr. Ebrad said.

The Mexican high-ranking official estimated they are at the same discussion point as 10 years ago, in 2012 in Cartagena, where a conclusion was reached that all nations must be invited. Cuba was excluded back then, today, there are other nations excluded.

Mr. Ebrad called for establishing; firstly, it´s a strategic mistake; secondly, to draw attention to the fact that it´s incredible that we continue seeing blockades, embargoes, and sanctions at this point, even during the pandemic, by contradicting international law and the objectives that encourage us in the Americas.

From our viewpoint, Mr. Ebrad expressed, everything advises us to change, to enter a new era for the relations among nations of the Americas, to seek a real and genuine unity for the benefit of all due to the new geopolitical reality we are currently experiencing with Europe, with the new economic competition, and the emergence of new regional trends.

To this end, he highlighted the evidence that the Organization of American States (OAS) and its way of acting are exhausted in the face of such a reality. Just look at the shameful role it (OAS) played in the recent coup in Bolivia.

Why don’t we rethink on the basis of two principles that I already stated? Non-intervention, and mutual benefit, he answered himself.

What if we take and recover the policy between the Americas on the basis of non-intervention and mutual benefit?, he insisted. That is what Mexico wants to put for your consideration at this Summit, he concluded.