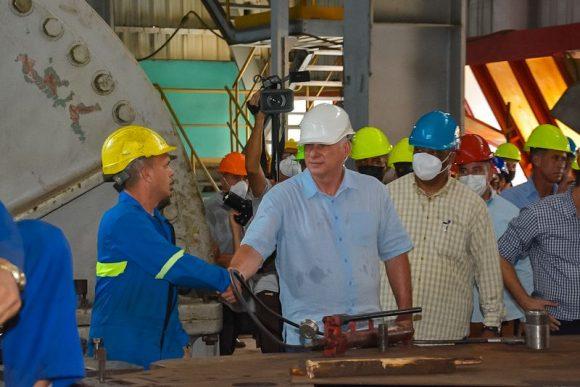 Havana, Jun 18 (Prensa Latina) Cuban President Miguel Diaz-Canel iscontinuing his tour of all eight power plants (CTE) in the country onSaturday, in support of the efforts being made to recover power generation, the Presidency reported on Twitter.

Diaz-Canel began this journey on Friday in eastern Cuba, where he visited the CTEs Antonio Maceo, in Santiago de Cuba, also known as Rente, and Lidio Ramon, at Felton, in Holguin.

The fact that Unit 6 of Rente is resuming operation on Saturday means that we enter in victory, and victory generates victory, the president noted.

It is not by chance to start the tour here because this will be the first repair that will be done as part of the maintenance process that is being carried out on essential plants for power generation in the national territory, he pointed out.

In those places, Diaz-Canel confirmed the progress of the strategy designed for the recovery of the national electricity system, affected by the tightening of the United States blockade, which makes it difficult for Cuba to access energy markets.

He also acknowledged the commitment by the workers of these centers, to whom he expressed the people’s gratitude for the hard work they are doing with a view to sustaining the current demand while undertaking the maintenance of the blocks in operation.

The word heroes is not a compliment to you; we consider it that way, for all the effort they are making in very difficult working conditions, the president said in Felton.

He also pondered the high expertise of experts, who carry out very demanding technological processes.

On Friday, Diaz-Canel also visited the CTE Diez de Octubre, in Nuevitas, Camagüey, whose three generation units are in operation and contribute 250 MW to the national electricity system.