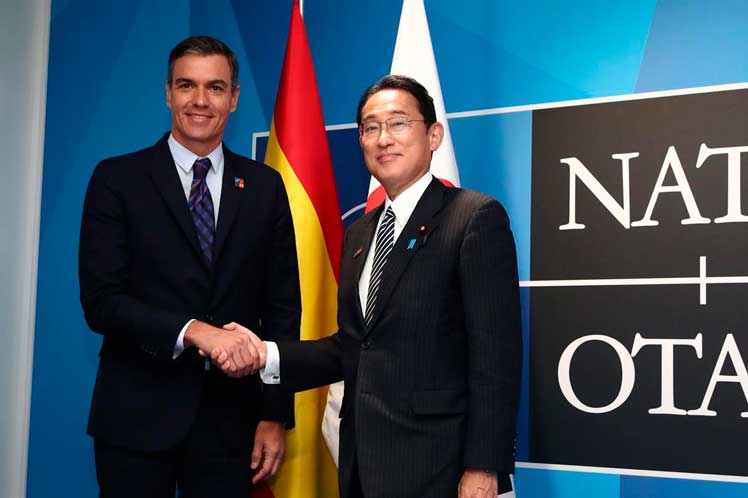 The President of the Spanish Government, Pedro Sánchez, met with the Prime Minister of Japan, Fumio Kishida, who is also participating in the summit of the North Atlantic Treaty Organization (NATO) at the IFEMA-Madrid fairgrounds.

Likewise, he valued the contribution of Spanish companies to meet the decarbonization objectives of the so-called country of the Rising Sun, and expressed his desire to have the investment of Japanese companies in those priority sectors for the Recovery, Transformation and Resilience Fund of Spain.

On the other hand, on the first day of the NATO Summit, the leaders of the 30 member countries approved the new Strategic Concept, which includes numerous issues, including a more comprehensive military deployment in the so-called Old Continent, with greater interference from USA.

In addition, it gave the green light to the future membership of Sweden and Finland, a long process that will go to the approval of the Atlantic Council in Brussels, and then to each country individually.

But there are also issues in the Strategic Concept such as terrorism, cyberspace, the erosion of arms control and climate change.

In the case of terrorism, he called it “the greatest and most direct asymmetric threat to the security of citizens and to international peace and prosperity.”

On cyberspace, the document stated that it is always contested, with malign actors seeking to degrade critical cyber infrastructure, interfere with government services, extract intelligence information, and impede military activities.

NATO lashed out in its statement against Russia, questioned the nuclear programs of Iran and North Korea, and questioned China.

In an additional program to the meetings, Queen Letizia of Spain led the visit to Segovia and the Reina Sofía museum on Wednesday.

His Majesty and the wife of the chief executive, Begoña Gómez, were with companions of the leaders of Albania, Belgium, Latvia, Lithuania, Luxembourg, Montenegro, North Macedonia, Slovakia, Turkey, the United States, South Korea, Cyprus, Malta and Australia, together with the companion of the Secretary General of NATO.

Tonight will be the official dinner offered by Pedro Sánchez to the participants in the summit, based at the Prado Museum, where they will first take a tour of the facilities that house, among others, works by Velázquez and Picasso.