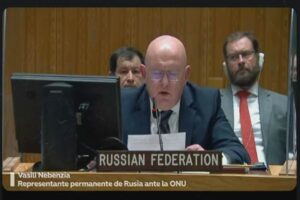 Moscow, Aug 24 (Prensa Latina) Russian Ambassador at the United Nations Vasili Nebenzia regretted on Wednesday that the Security Council allowed Ukrainian President Vladimir Zelensky to speak by video conference in violation of the rules of that international organization.

“We regret that the members of the Council have spoken out against respecting the rules of procedure. We could still understand the logic of the Western sponsors of Kiev, who are ready to sacrifice not only all Ukrainians by covering up the crimes of the regime, but also the work of the UN,” said the diplomat, quoted by Sputnik news agency.

Nebenzia claimed that the disappointment is with the other members who are supposedly committed to respecting the rules and protecting them, who contributed to eroding the foundations and practices of the UN body.

In this context, the Russian representative stated that despite not agreeing, they will listen to the Ukrainian president, and then outline Russia’s points of view in relation to the positions taken by Ukraine so far.

In that regard, Nebenzia added that they expect Zelensky’s presence throughout the meeting.

Previously, the Russian ambassador opposed the Ukrainian head of State’s participation via a video conference in the Security Council meeting.

Furthermore, Zelensky was declared head of the Ukrainian delegation at the 77th session of the General Assembly, which can only be done in person,” Nebenzia recalled.

Despite this objection from Moscow, the UN Security Council supported the participation of the Ukrainian president in a procedural vote, which does not imply the use of the veto, 13 countries expressed themselves in favor of giving the Ukrainian leader the floor. Russia voted against and China abstained.