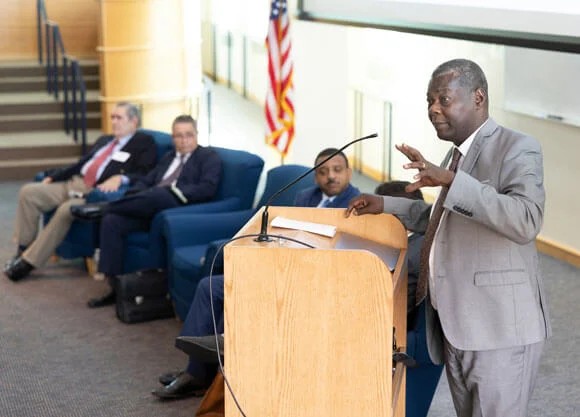 Washington, Sep 15 (Prensa Latina) Cuba is more than willing to sit down and open a dialogue with the United States to foster mutually beneficial ties, Ambassador Pedro Luis Pedroso said during a conference today.

In a meeting with students from the Quinnipiac University Business School, in the state of Connecticut, the permanent representative of Havana to the United Nations delivered the speech “The Winds of Change”, in which he defended a peaceful economic and prosperous association between both countries.

The diplomat condemned the siege by the United States against the Caribbean nation and the application of the economic, commercial and financial blockade for more than six decades, considered the main obstacle to the development of the island.

He recalled the advances in ties during the Government of Barack Obama (2009-2017), but the financial persecution and inclusion on the list of States that according to Washington sponsor terrorism, under the administration of Donald Trump (2017-2021), that “cynically reinforced” the siege.

However, Pedroso emphasized there is renewed hope for reconciliation, since “there are many things that unite us and can benefit both parties.”

The official praised the achievements of the Caribbean nation, such as the development of its own vaccines to face the Covid-19 pandemic, in the midst of an adverse context due to the global crisis and the impact of the coercive measures applied by Washington.

In the meeting held last Friday, the ambassador lamented the limitations derived from the blockade and others, such as the restrictions on Internet access that hinder Cuban university students, and emphasized how a relaxation of the unilateral provisions of the White House could help the people of the island.

In addition, he proposed an educational delegation so that Quinnipiac teachers and students could visit the island and see the reality of the country for themselves.

Cuban diplomats strengthened alliances with residents, authorities and representatives of more than 20 Connecticut organizations during a recent tour of the communities of Hamden, Hartford, Middletown, Willimantic and New Haven.

The delegation made up of members of the mission to the United Nations: Pedroso, Ambassador Yuri Gala, Minister Counselor Roberto Hernández and Second Secretary Ernesto Sierra, held meetings to support the elimination of the blockade and promote bilateral relations.

In addition to the Business School, the representatives went to the Albert Schweitzer Institute, where Pedroso also exchanged on the political history of Cuba and the growing tension from the White House.