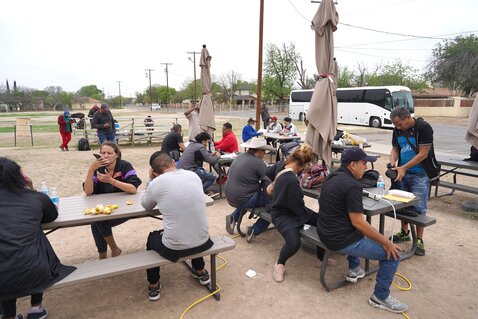 Bowser announced in a press conference a new government office tasked with the local response to arriving migrants that will also support new arrivals who are seeking asylum.

The District´s new Office of Migrant Services will be housed within the Department of Human Services, Bowser said, and will provide basic needs to arriving migrants, including meals, transportation, urgent medical care and transportation to connect people to resettlement services.

The time-limited emergency declaration will offer Bowser and her administration more power and flexibility, meaning officials will be able to mobilize people and resources faster and seek federal financial assistance.

Texas Republican Gov. Greg Abbott started off by busing migrants to the nation´s capital in April to protest the Biden administration´s immigration policies.

Abbott and Arizona Gov. Doug Ducey, another Republican, have so far sent hundreds of buses to DC, and neither have expressed any intention of stopping.

The DC Mayor Bowser criticized Abbott and Ducey for their role in creating the “growing humanitarian crisis,” but also took aim at the federal response, which she said “has been lacking in some respects.”

Arizona, on the other hand, which is only sending buses to DC, has sent 46 buses carrying 1,677 migrants.

The Pentagon, according to a copy of the rejection letter reviewed by CNN, said it “would not be appropriate” to use the DC National Guard and that the Defense Department “cannot fulfill your request.”