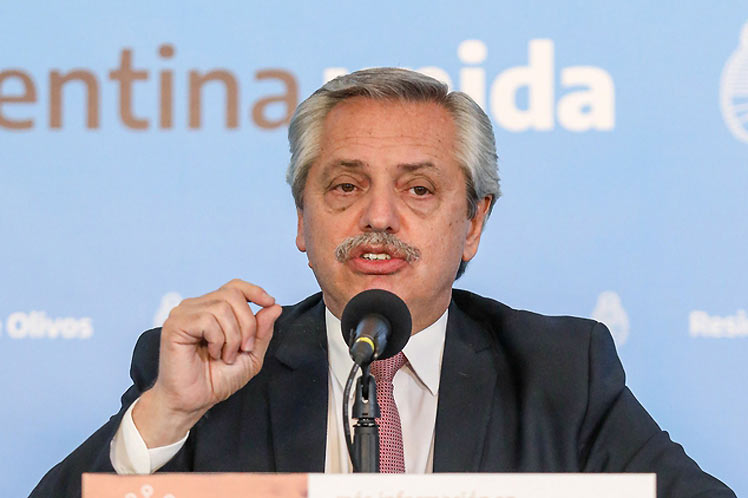 New York, Sep 20 (Prensa Latina) Argentine President Alberto Fernandez on Tuesday urged to build a new international system based on peace, equality and where those who promote hatred and violence have no place.

At a conference at The New School University in New York, the Argentine president stated the Covid-19 pandemic laid bare weaknesses, miseries, shortages and injustices in the world we are living in.

Something imperceptible to the human eye was capable of wiping out millions of people and did not discriminated against rich and poor, powerful and weak. Moreover, it turned all economies upside down. We have an ethical and moral obligation to build something different because, if we do not do so, so much suffering was for nothing, Fernández said.

Latin America is the world´s most unequal continent and it is now the time to change such a reality. We must also take a close look at the Caribbean, which is an area at risk from climate change.

Fernández, on the other hand, stressed that the Americas must be heard in the search for peace in Ukraine because the south will be the most hit by the Ukraine conflict´s aftermaths and the food crisis drawing near.

We cannot allow lives to continue to be lost in armed conflicts. Argentina and the Community of Latin American and Caribbean States want to develop and be actors of a peaceful world, he said.

The assassination attempt on Vice President Cristina Fernandez a few days ago is the result of hatred. This is happening all over the world. In Europe, for example, recalcitrant right-wingers are progressing. We cannot allow this to happen.

We have to build a new international system, more egalitarian, balanced and equitable, where everyone has a place and no one is excluded. I am certain that Latin America is rethinking its own track, he said.

The head of state assured that the Americas “lived four horrible years under the Donald Trump Administration, a term during which the Lima Group emerged, an attempt was made to destroy the Southern Common Market and the Union of South American Nations was torn to shreds”.

Yet we are beginning to change. Andrés Manuel López Obrador in Mexico and instead of looking north, he looked south. We welcomed former President Evo Morales and former Vice President Álvaro García Linera, victims of the assailants of power in Bolivia, sponsored by the Organization of American States (OAS) and Trump´a Administration, he pointed out.

We call for peace to start building a world that allows us to win without the need for blood and war, he said.