US fines entities for breaking blockade on Cuba 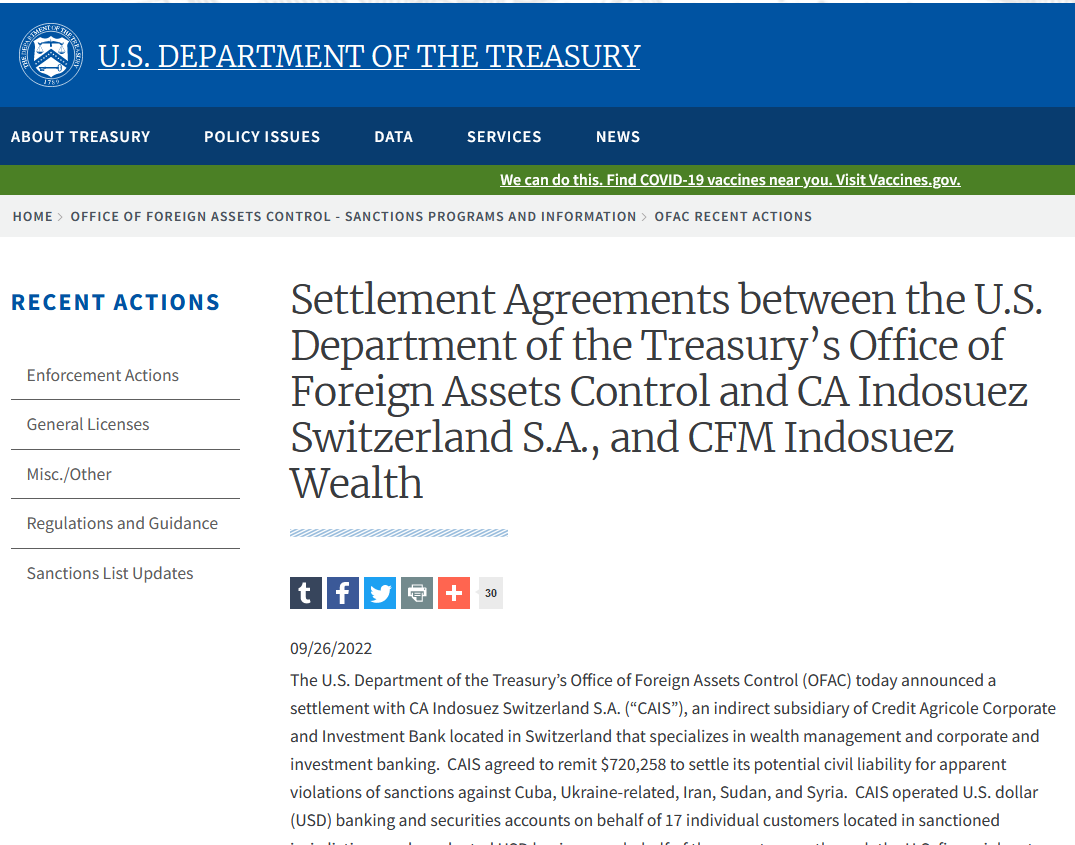 US fines entities for breaking blockade on Cuba

Washington, Sep 30 (Prensa Latina) While activists, organizations and countries today seek ways to help Cuba recover after the impact of the hurricane, the United States due to the imposed blockade, fines entities for managing operations with the island.

This was recently ratified by the US Treasury Department, when it forced the company CA Indosuez Switzerland S.A. (CAIS, for its acronym in English) to pay 720 thousand 258 dollars to its Office of Foreign Assets Control (OFAC), for alleged violations of the laws of the economic, commercial and financial blockade.

According to a statement, the Swiss company specialized in wealth management and corporate and investment banking, broke the US coercive measures imposed against Cuba and other nations such as Iran, Sudan and Syria.

‘CAIS operated bank and securities accounts in United States dollars (USD) on behalf of 17 individual clients located in sanctioned jurisdictions and conducted business in that currency on behalf of these clients through the United States financial system,’ the text indicated.

Between April 2013 and 2016, CAIS enabled customers located in these jurisdictions to process 273 transactions for a total amount of $3,760,180 dollars.

Similarly, OFAC announced an agreement with the firm CFM Indosuez Wealth, located in Monaco and specialized in wealth management and corporate and investment banking, to remit $401,039 for apparent violations of the sanctions against Cuba, Iran and Syria.

According to the government agency, CFM operated bank and securities accounts in US dollars on behalf of 11 individual clients located in sanctioned jurisdictions and conducted business in that currency through US correspondent banks and securities brokers or dealers registered here.

According to the Treasury Department, the amounts are to settle an alleged “civil liability for apparent violations” of the blockade, imposed for more than six decades and considered the main obstacle to the development of the Caribbean nation.

Earlier this month, US President Joe Biden signed the extension of the so-called ‘Trading with the Enemy Act’, which extends the blockade until September 14, 2023 and authorizes the president to impose economic restrictions.

According to the Havana Foreign Ministry, the measure ignores the world community’s rejection of this policy, ‘opportunistically intensified in the context of the Covid-19 pandemic to render the Cuban people hungry, sick and miserable,’ he underlines.

After Hurricane Ian passed through Cuba on Tuesday, which damaged infrastructure, agriculture, telecommunications and the national electrical system, North American activists set up web pages to raise funds and help the island in its recovery.

The Forum of the Peoples movement shared on its official Twitter account the link to a site to receive donations and contribute to relief efforts, as well as the Puentes de Amor solidarity project, focused on the purchase of food, drugs and medical equipment.