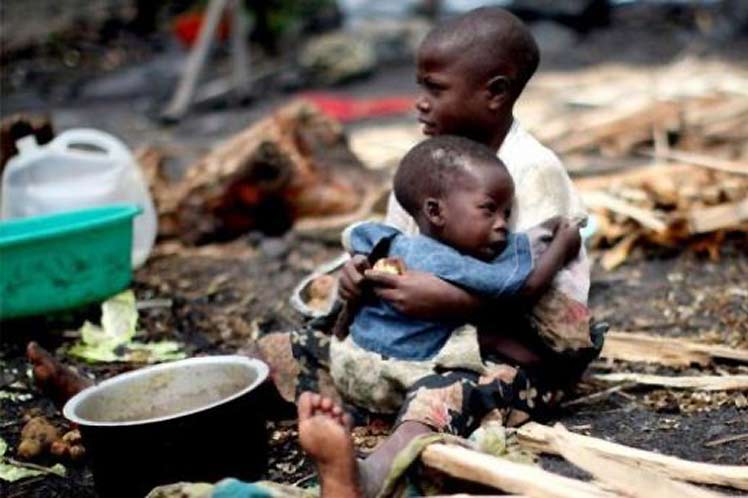 United Nations, Oct 1 (Prensa Latina) 2020-2021 period showed 40 million people facing up hunger, a figure that may surge as present situation is worsening at an alarming rate, Food and Agriculture Organization of the United Nations (FAO) reported.

Establishing five categories of hunger help to better understand how big this condition is by defining it as shortage of basic foodstuffs, uncomfortable or painful sensation, caused by insufficient consumption of food energy.

On that basis, it was reported that at least 193 million people were in phase three or crisis stage in 2021, that is, as households have access to adequate minimum food consumption, but to achieve this they must resort to unconventional or unsustainable strategies over time.

40 million people were in phase four and over half a million in phase five, in which irregular access to food leads to too high levels of malnutrition and mortality, famine or too critical states of starvation, malnutrition and death, respectively.

Thus, hunger map leads to Africa, since out of the 10 nations most hit by hunger half of them are African: Democratic Republic of Congo, Ethiopia, Madagascar, Nigeria and South Sudan, a list that is completed with Afghanistan, Yemen, Syria, Pakistan and Haiti.

The document also makes an aside with Latin America, to highlight that over 12 million people in five countries face up acute food insecurity (category three or higher).

The World Food Crisis Report 2022 also highlighted conflicts were major cause of food crises in 2021, incidents that left 139 million people in 24 countries at risk of starvation.

Among solutions, the document´s authors pondered aiding nations to have their own sustainable food systems, less dependent on the outside world and with resilient supply chains to avoid food shortages.

UN confirms massacre of civilians by Tutsi insurgents in DRC

UN worries by racist treatment of Shias in Bahrain

UN confirms massacre of civilians by Tutsi insurgents in DRC

UN worries by racist treatment of Shias in Bahrain