Trans-Pacific Treaty focuses on a controversy in Chile 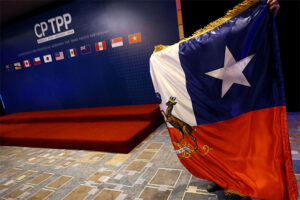 Trans-Pacific Treaty focuses on a controversy in Chile

Santiago, Chile, Oct 14 (Prensa Latina) The Comprehensive and Progressive Agreement for Trans-Pacific Partnership, also known as TPP-11, on Friday continues to generate controversy in Chile between those who advocate for its rapid implementation and those who call for ratifying bilateral agreements before it enters into force.

The TPP-11 was approved in the Senate by 27 votes for, ten against, and one abstention on October 11, despite the rejection of some 200 social and labor organizations in the country.

The votes in the Upper House were from the opposition right-wing and other senators of the Democratic Socialism coalition as long as the left-wing bloc formed by the Communist Party, Frente Amplio (Broad Front), and the Social Green Regionalist Federation voted against.

Its defenders, especially the right wing and entrepreneurs, emphasize that it opens tariff-free doors to more than 3,000 products and will generate annual incomes of 1.2 billion dollars.

In a visit to the Antofagasta region, President Gabriel Boric defended the signing of the side letters and announced that negotiations are already underway with countries such as Mexico, New Zealand, Australia, Brunei, and Thailand.

Some 200 trade union, environmental, territorial, feminist, peasant, and other organizations rejected the agreement because of the negative consequences for national production, sovereignty, development, and the vulnerability of the State.