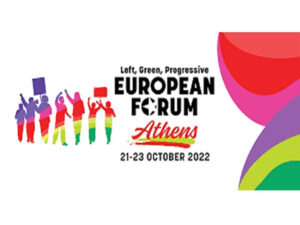 Athens, Oct 23 (Prensa Latina) The European Forum of Left, Green, and Progressive Forces on Sunday condemned the economic, commercial, and financial blockade of the United States against Cuba and the extraterritorial nature of that policy.

In the final declaration of the sixth edition of the platform, which met in Athens from October 21 to 23, participants rejected all kinds of unilateral coercive measures, especially the blockade imposed by Washington on Cuba and recalled its enforcement for more than six decades.

The meeting also repudiated the extraterritorial scope of the blockade against Cuba, which it described as illegal and contrary to International Law.

The European Forum demanded support from the forces that represent the progressive governments of Latin America and are struggling to achieve integration and the definitive end of the neo-colonialist exploitation of their resources and wealth.

The declaration also advocated initiatives to cancel the debt that traps African countries, and the adoption of measures to fight the consequences of climate change.

The text also expressed concern by the left, green and progressive organizations about the continent in light of the strengthening of fascist trends and parties, a phenomenon that they attributed to a period of crisis in capitalism.

This progress of fascism in Europe should make us self-critically reflect on our inability to convey the horror of this ideology to young people and propose a strong, direct and solvent response capable of challenging it, he warned.

Similarly, the platform called for peace and a response to the crisis that will prevent the working class and the popular layers of society in Europe from paying the consequences of an economic situation of neoliberalism.

The European Forum is considered one of the main political spaces for the pluralist exchange of ideas in favor of democratic, social, pacifist, ecological and feminist transformations.