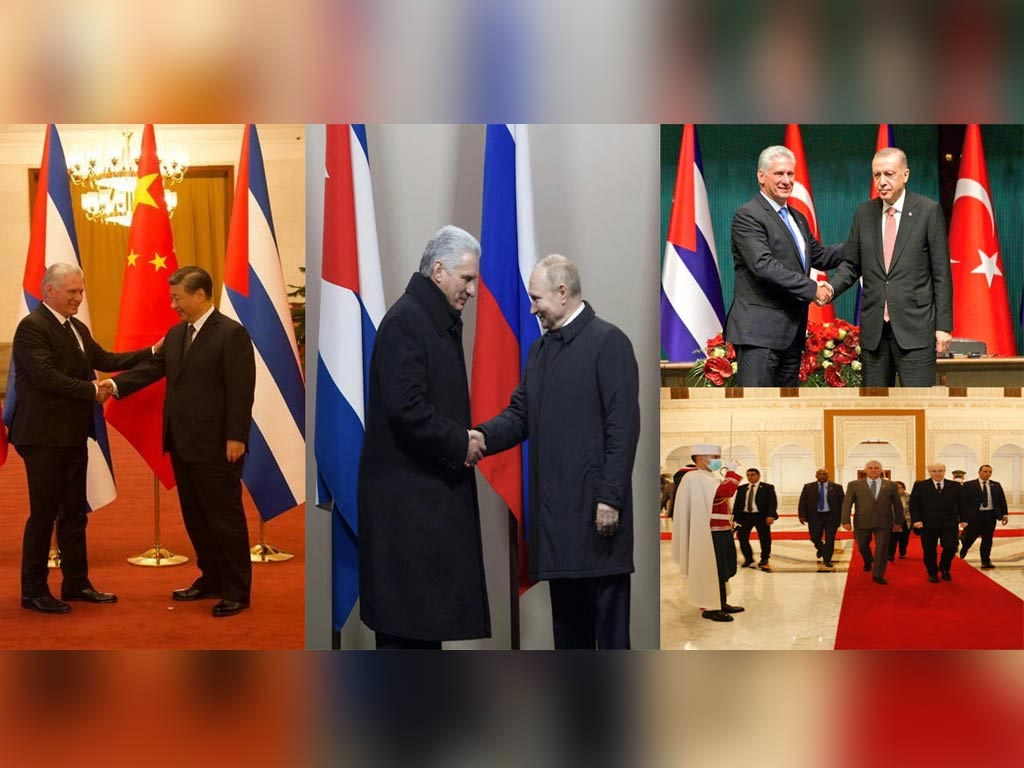 Havana, Nov 26 (Prensa Latina) Cuba gave a boost to political and trade relations with strategic partners during the international tour President Miguel Diaz-Canel has wound up in Ankara, Türkiye.

The Cuban delegation was made up of several ministers and officials from key sectors of the national economy and had an intense cycle of dialogues and signing of agreements in Algeria, Russia, Turkey and China.

In Algiers, Diaz-Canel completed his first visit as head of state to an African Union country, where he met with the President and Minister of the Interior, Abdelmadjid Tebboune.

The El Muradia Presidential Palace, seat of the Algerian Executive, was the stage of the meetings at the highest level in which it was agreed to promote cooperation projects in health, energy, renewable sources, the medical-pharmaceutical industry and cultural, educational, scientific-technological exchange.

Tebboune announced that it was considered to alleviate a little the Cuban economic context, canceling the debt services and postponing its reimbursement for another time, as well as offering Cuba a solar energy plant for power generation.

In early 2023, he said, a session of the Joint Commission between the two countries will be held, in which the Algerian delegation will go to Havana with a group of 150 businessmen who will examine the possibilities of investment in Cuba.

In Moscow, Diaz-Canel was welcomed by the President of the Russian Federation, Vladimir Putin, but before that he had the opportunity to talk with the highest representatives of the legislative and government bodies. Despite the distances, the Cuban and Russian economies face similar obstacles due to the coercive measures that weigh on them, which together with the historical ties of cooperation, open new possibilities for the promotion of existing projects and programs.

The Cuban Minister of Foreign Trade and Investment, Rodrigo Malmierca, explained that as a result of this visit, existing joint projects such as the modernization of Antillana Acero (steel industry); the increase of efficiency in the Boca de Jaruco oil field; the rehabilitation of the Santa Clara Mechanical Plant; and the operation of a diagnostic and maintenance center for Kamaz equipment in the Mariel Special Zone were agreed upon.

Under the National Development Plan until 2030 of the intergovernmental commission for cooperation between the two countries, progress was also made in promoting projects in transportation, energy, the biopharmaceutical industry, tourism, food production, banking and financial issues and the strengthening of Russian investment in the island.

The inauguration in Moscow of a statue of the historic leader of the Cuban Revolution, Fidel Castro, was a special moment in the official program of the visit, which, according to Vladimir Putin, in contemporary conditions, should strengthen the current bilateral cooperation.

With these important advances Diaz-Canel and the delegation that accompanied him arrived in Ankara, Türkiye, on the 70th anniversary of the establishment of diplomatic relations between that Eurasian nation and Havana.

At the conclusion of the meeting between Diaz-Canel and Turkish President Recep Tayyip Erdogan, both dignitaries announced their mutual interest in promoting projects in areas such as biotechnology, renewable energies, tourism, agriculture, livestock, health, education, sports and culture.

Six agreements were signed at the Presidential Palace in Ankara on topics such as foreign relations, banking exchange, cooperation and heritage.

Erdogan pointed out that Latin American and Caribbean relations are one of the main pillars of his government’s foreign policy and in that context Cuba is one of our main partners in that region.

On November 24, Diaz-Canel arrived in Beijing for a short but intense program that included a dialogue with Chinese President Xi Jinping and other high-level governmental and legislative representatives.

At the conclusion of the meeting between the two dignitaries, the first to take place with a representative of Latin America and the Caribbean after the 20th Congress of the Communist Party of China, a joint statement was issued that reflected the willingness to expand communication and relations.

The signing of 12 agreements and the granting of donations evidenced the mutual interest in strengthening cooperation in Cuba of the Chinese initiative of the Silk Road and Belt and Road.

On his return to Cuba, Diaz-Canel made another stopover in Türkiye, this time in Istanbul, where he met with more than a hundred businessmen from that country.

The balance of the Cuban president’s international tour was positive, not only because of the economic and commercial advances, but also because it evidences the international insertion of Cuba, in spite of the isolationist vocation of the blockade imposed by the United States for more than 60 years.