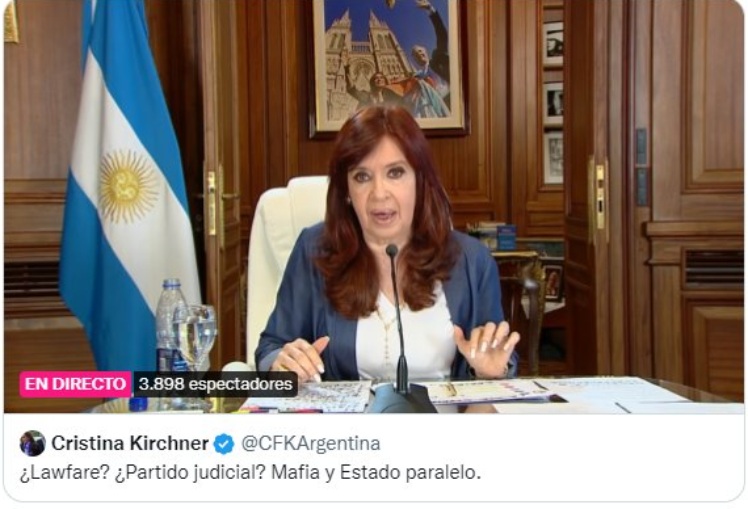 Buenos Aires, Dec 6 (Prensa Latina) The Argentine vice president, Cristina Fernández, denounced today the existence of a parallel State, a mafia and a judicial party that prosecuted her for crimes that she did not commit.

While social organizations rejected the persecution against her, the Federal Oral Court 2 sentenced the also head of the Senate to six years in prison and perpetual disqualification for holding public office.

Said verdict corresponds to the so-called Road Cause for alleged irregularities in the awarding of 51 works in the province of Santa Cruz between 2003-2015, facts that Fernández rejected and denied during three years of hearings.

As I said in 2019, the sentence was written, the former head of state asserted and recalled that Judge Julián Ercolini, who instructed the process, declared himself incompetent years ago and referred the case to that territory, where it was dismissed.

The Government of Mauricio Macri (2015-2019) revived the cause as if by magic and Ercolini brought it back. They prosecute me for fraudulent administration, but according to the Constitution, the President is not responsible for the administration and execution of the budget, which is the responsibility of the Chief of Staff, explained Fernández.

Throughout the trial we proved that I did not sanction laws or manage anything. That is the responsibility of Congress. We demonstrated that none of the lies that the prosecutors Diego Luciani and Sergio Mola told in their histrionic plea were true, to such an extent that when they had to replicate the facts, documents, expertise and testimonies, they could not, he added.

Fernández asserted that this is not a sentence by the Magna Carta, the administrative laws or the Penal Code, but that it has its origin in a parastate system, where decisions are made about the life, patrimony and freedom of Argentines, and that it is outside of the election results.

I naively spoke of lawfare, but this is not a judicial persecution, it is a parallel State and a mafia, she asserted.

In addition, she denounced the links of judges and prosecutors with Macri and the participation of Ercolini and other officials in a private trip paid for by Grupo Clarín.