Venezuela tightens links with the UN 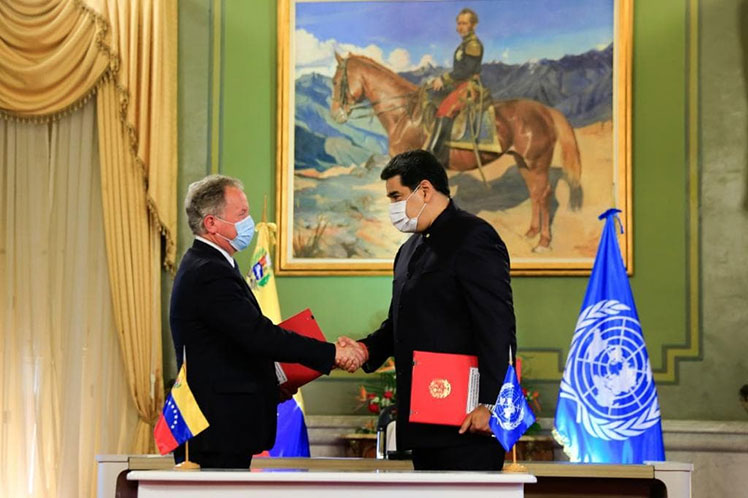 Venezuela tightens links with the UN

The parties sealed the alliance at the Miraflores Palace (seat of the Executive), in Caracas, after the meeting between the Venezuelan President, Nicolas Maduro and the executive director of the international organization, David Beasley.

The Head of State highlighted the process of rapprochement that led to the signing of the cooperation agreement, which will initially allow the promotion of food aid projects for children in early education.

‘All of Venezuela applauds the step we have taken by signing this first agreement with the World Food Program,’ said Maduro, highlighting the immense experience and technical capacity of the organization, which was awarded the Nobel Peace Prize in 2020.

He also reiterated the Venezuelan government’s commitment to maintaining permanent communication with the WFP to open the doors to new initiatives.

For his part, the executive director of the UN agency ratified its intention to strengthen the joint work agenda to respond to the food needs of Venezuela.

After the signing of the MoU, Foreign Minister Jorge Arreaza dismissed the repeated statements of Western media and governments that hold the Caracas authorities responsible for denying the entry of humanitarian aid.

‘The UN and the Venezuelan government agreed on humanitarian response plans since 2018,’ asserted the foreign minister, who pointed to those same actors for imposing or promoting sanctions against the nation.

‘UN cooperation with Venezuela is the most underfunded in the world and at the same time, the most questioned in the media. We hope that the agreement with the WFP will begin to reverse this absurd paradox,’ asserted the Venezuelan Foreign Minister.

Almost 40% of Somalis could die due of starvation

Almost 40% of Somalis could die due of starvation