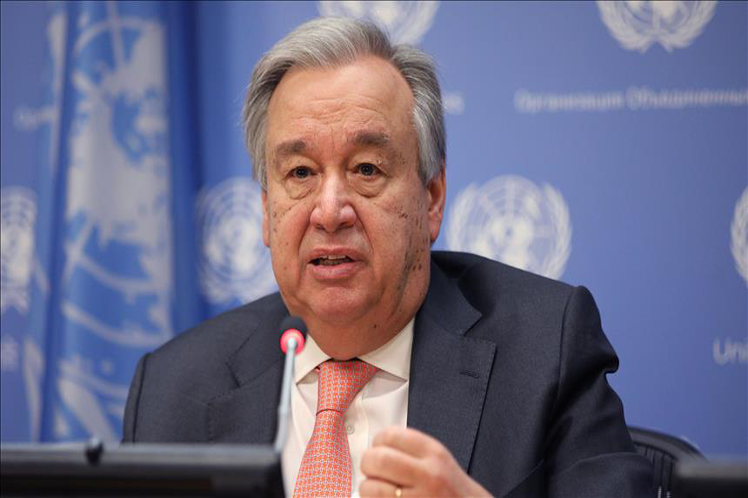 I am devastated by the number of fatalities, mostly minors and women, he said in the Security Council, which this Sunday dedicates an open debate to the escalation between Israel and Palestine.

I am also concerned about the fighting in the West Bank, especially in East Jerusalem, where entire families have been evicted, he stressed.

The headline reiterated his call to both parties to avoid fiery rhetoric and stop the violence, as the current situation threatens to increase instability throughout the area.

The destruction and terror must stop immediately, and the United Nations remains committed to working with international parties and partners in order to achieve a just and lasting peace, said the Portuguese diplomat.

As highlighted by the highest representative of the United Nations, the only way out of this crisis is to return to negotiations, with the goal set in the solution of two states, Israel and Palestine, with Jerusalem as the shared capital.

The longer this violence lasts, the more difficult it will be to achieve those goals, the secretary general lamented.

For his part, the UN special coordinator for the peace process in the Middle East, Tor Wennesland, called for a cessation of hostilities from both sides.

The crisis worsens and this escalation between Israelis and Palestinians may affect the stability of the entire Middle East region, he noted.

Some 44 Palestinian children lost their lives, entire families were murdered, there are more than 34,000 people from that Arab town displaced from their homes, while limited access to water and food persists in the Gaza Strip, the Norwegian diplomat explained.

The violence is unacceptable and unjustifiable on both sides, this escalation has already produced tragic results and its continuation would have devastating consequences for both Palestinians and Israelis, he insisted.

Wennesland expressed great concern about the damage to the infrastructure of Gaza, which is now facing a humanitarian emergency, there are badly damaged schools and hospitals, extensive power outages.

In this regard, he asked Israel to open the crossings so that the necessary resources enter Palestinian territory.

In the midst of this serious situation, the United Nations representative considered, we still do not address the key issues that fuel this long-standing conflict.

It is necessary to end the Israeli occupation of Palestinian territory and achieve a two-state solution, based on the pre-1968 borders and with Jerusalem as a shared capital, he told the UN Security Council.