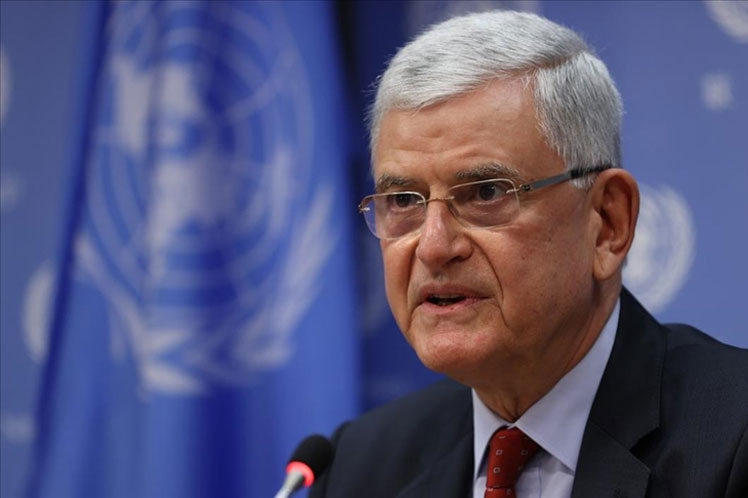 At this time, it is quite necessary for UNSC to speak out with a ‘unified voice’, since its inaction hinders UN´s credibility in other peace and security matters, Bozkir stressed.

Speaking at the UNGA session about Palestine´s issue and situation in the Middle East, the UNGA president supported the call for a ceasefire in the Gaza Strip, which has been bombed for 10 days by Israel´s Army Forces.

Real action is needed to stop the vicious cycle of violence, to put an end to Israel’s occupation and to defend human rights, Bozkir stressed.

He also demanded protection for all civilians and condemned Israel´s attacks on them and on places of worship, such as mosques.

To Bozkir, it is particularly devastating the escalation of attacks began at the end of Ramadan.

The attack on Al-Aqsa mosque, one of the world´s holiest places for 1.8 billion Muslims, was gruesome, Bozkir said.

Ejecting Palestinians from their homes in Sheikh Jarrah could be a war crime under international law, and Israeli courts have no authority in occupied East Jerusalem, the UNGA president stated. Palestine´s Foreign Minister Riyadh Al-Maliki, on the other hand, denounced to UNGA the genocide Israel is committing against the Arab people and asked to stop this massacre.

‘How can an occupying power have the right to defend itself when a whole people under occupation are deprived of same rights?’ Al-Maliki noted. Meanwhile, the Israeli Ambassador to US and UN Gilad Erdan said that Tel Aviv is attacking Hamas positions, although UN reports referred to the destruction of hospital, school and other civilian infrastructure in Gaza.