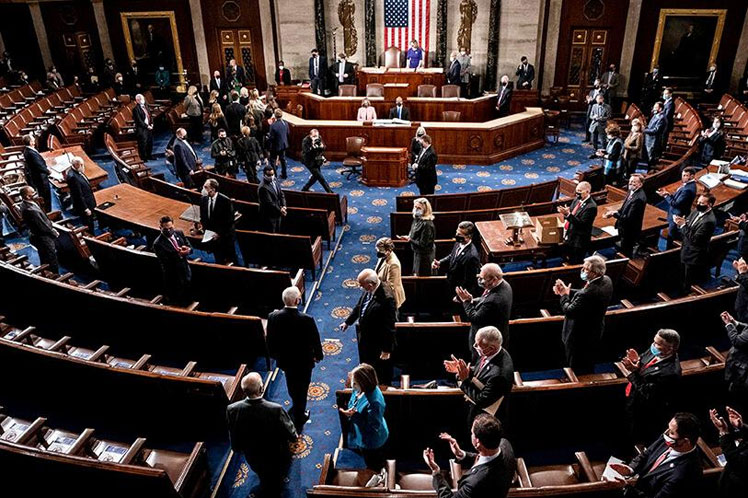 Washington, May 29 (Prensa Latina) President Joe Biden proposed a trillion budget on Friday that would take the United States to its highest sustained levels of federal spending since World War II as he looks to fund a sweeping economic agenda that includes large new investments in education, transportation and fighting climate change.
Share on facebook
Share on twitter
Share on whatsapp
Share on telegram
Share on email

Such a figure would take the country’s debt to record levels, according to The Hill newspaper, while detailing this Biden´s proposal would consolidate deficits running above $1.3 trillion throughout the next decade.

The proposal for the 2022 fiscal year and ensuing decade shows the sweep of Mr. Biden’s ambitions to wield government power to help more Americans attain the comforts of a middle-class life and to lift U.S. industry to better compete globally.

The levels of taxation and spending in Mr. Biden’s plans would expand the federal fiscal footprint to levels rarely seen in the postwar era to fund investments that his administration says are crucial to keeping America competitive.

The figure, released by the White House, ties together three major spending proposals already announced by Biden: $2.3 trillion US Employment Plan, $1.8 trillion US Families Plan, and $1.5 trillion in discretionary spending.

Non-defensive spending would increase by 16% and defense budgets would expand by 1.7%.

Critics pointed out that the budget should focus on finding a path to sustainability in the closer term rather than putting it off for a decade.

The White House insists Biden´s plan puts the country on a ‘responsible fiscal course’ by investing in economy and paving the way for long-term deficit reduction.

Congress will ultimately have the final say on spending, taxes, and policy proposals, while this generally differs from President’s budget request, as has happened on previous occasions.

According to Vice Chairman of the Senate Appropriations Committee Republican Richard Shelby, what Joe Biden sent was only a proposal and in the coming weeks, Congress will exercise its constitutional power in appropriation bills.

Likewise, he criticized what he called ‘a plan for higher taxes, overspending and an underfunded military.

Shalanda Young, Director of the Office of Management and Budget, said Biden will not raise taxes on people earning less than $400,000 a year. It is possible that he could propose to extend the Trump tax cuts for those earners in a future budget, potentially coupled with additional tax increases on high earners or businesses.

The Democratic president’s spending plan would take the country to its highest sustained levels of federal spending since World War II, The New York Times reported.