Argentine Minister of Health met with President of Cuba 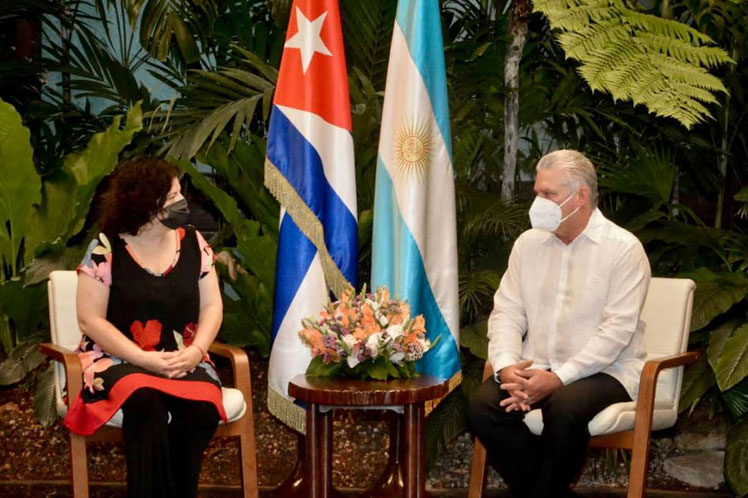 Argentine Minister of Health met with President of Cuba

‘We are talking about the common project and about working not only to value a fully developed, produced and applied vaccine in Latin America, but also to do so in other areas of health and science and technology,’ said the minister, who He traveled to Cuba with the presidential adviser Cecilia Nicolini.

The Argentine delegation fulfilled an intense agenda since it arrived on the island from Mexico to learn about the progress of the anti-Covid-19 vaccine candidates Soberana 02 and Abdala, in phase III, two of the five in which Cuban scientists are working.

According to a statement from the Health Ministry, Vizzotti said that Argentina ‘is working hard to strengthen ties, access the vaccine, but above all collaborate in whatever way it can.’

This includes the provision of inputs, the possibility of purchasing and the support to scale production and advance with our regulatory entity and that of Cuba, study the interim phase III analyzes and expand the possibility of research in scenarios such as our country, which It can give a role to the vaccine that is also very interesting’, said the source.

Also participating in the meeting, at the Palace of the Revolution, were Deputy Prime Minister Jorge Luis Perdomo Di Lella; the Minister of Health, José Ángel Portal; the Vice Minister of Foreign Relations of Cuba, Ana Teresita González Fraga, and Eduardo Martínez Díaz, head of BioCubaFarma, the company of the Biotechnology and Pharmaceutical Industries.

Vizzotti explained that putting the vaccine in value ranges ‘from basic research to production and closing the virtuous circle by applying it to the population, see how people receive the vaccine with great hope, as in Argentina.’

The official also described the meeting as very productive and highlighted the invitation that Díaz-Canel sent through him to President Alberto Fernández to visit the Caribbean island ‘in August, when a very important percentage of the population is already vaccinated in both countries ‘.

During their stay in Havana, Vizzotti and Nicolini toured the production plant of the Center for Genetic Engineering and Biotechnology of Cuba, with the aim of knowing the characteristics and results of the Soberana 02 and Abdala vaccines.

The health ministry announced that, upon her arrival in Buenos Aires, the minister will give a press conference from the Ezeiza International Airport, in which news of the visit is expected.