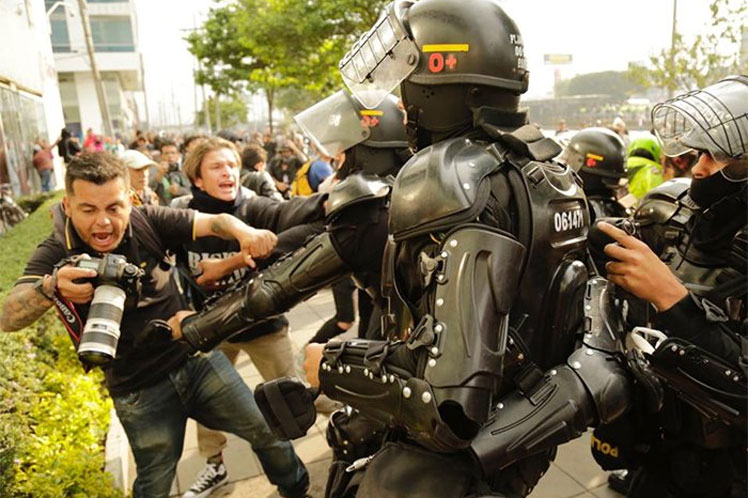 This Sunday, the President, amidst accusations against police due to the brutality against peaceful protesters, announced his government will request Congress to approve a number of changes in the Force.

According to what was announced, the proposal foresees a full transformation of the police force which makes emphasis on the strict enforcement og human rights, certification of processes and a change in the institutional image of the Body.

For Congresswoman Angela María Robledo, the real change in the police would be to control the use of so called ¨non-lethal¨ weapons, answer for their crimes before ordinary justice and depend on the Ministry of Interior and suspend the Antiriot Mobile Squad (ARMS).

¿Will your change be to replace the green uniform for a blue one?, questioned Robledo when referring to another change in the Force.

According to Ramiro Bejarano, professor in a number of Colombian universities as well as lawyer, it is more of a ¨make up to try to hide the official repression¨.

He considers Duque announced the changes the very same day when a regional human rights commission arrived in the country to confirm military and police violence in the context of demonstrations.

He emphasized that even so, there are still cases of police excessed force, wounded, dead and dissapeared, meanwhile the General Attorney Office keeps silent.

The also professor and columnist at La voz newspaper, Gabriel Becerra, expressed that such suggested reform is nothing but an unconceivable demagogy from a ¨bad government¨.

He underlined from his account on twitter that Colombian police does not need to be modernized but ¨refounded¨.

An influential user of the platform, identified as retired Sargent Ochala remembered the proverb that goes: ¨Clothes don´t make the man¨, as he warned, for the reform, ‘will be the same¨.

The first thing you need to do is find and incarcerate the bandit assasins who have been killing young people on the streets with the help of ¨paracos¨(paramilitary force member belonging to an illegal armed organization from extreme-right defending private interests, having nothing or little to do with the wellbeing of the community).

Past April 28, a national strike began against a harmful tributary reform brought forward by Duque´s government to increase taxes on wealth and services and creating some others.

Demonstrations led to a social outburst marked by violent repression by the public force leaving over 70 dead, hundreds of wounded and dissapeared, dozens of sexual assaults, injured people, some with loss of eyes, tortures and others.