Investigation if there was malpractice leading to Maradona’s death 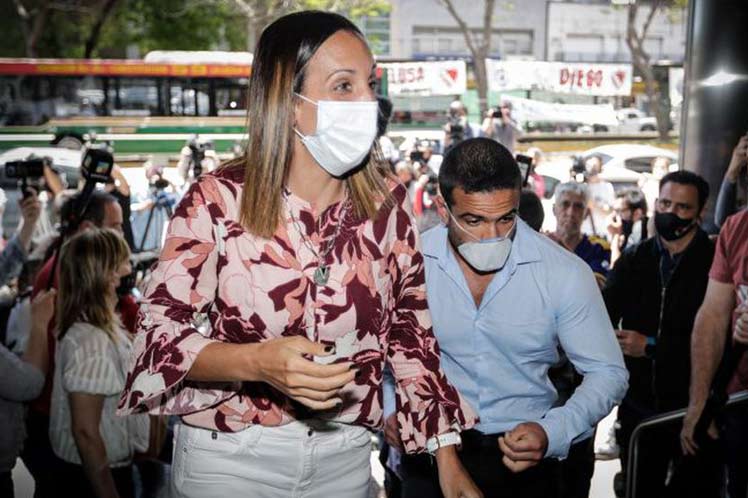 Investigation if there was malpractice leading to Maradona’s death

It is 36 year-old Dahiana Gisela Madrid, who is one of the seven people indicted with simple homicide of eventual malice, a crime carrying a sentence from eight to 25 years of imprisonment, if there was malpractice leading to the death of The Golden Boy.

Madrid was in guard duty that noon when Maradona was found dead in a room of a house in Buenos Aires community of Tigre, where he was recovering from a surgery due to a subdural hematoma. She was first to try reanimation without success.

San Isidro community´s Attorney Office summoned the nurse to declare today, she will be interrogated by the three attorneys leading the investigation, Patricio Ferrari, Iribarren, and Laura Capra.

The nurse and her co-worker Ricardo Omar Almirón are held responsible for not having assisted Maradona.

Previously, during her declaration as witness, Madrid explained that morning of November 25, she never entered Maradona´s room to let him rest, because she knew there would be the sychiatrist and psychologist visits planned for noon, and she described how she performed the unsuccessful reanimation maneuvers.

Then, she was called again by the Attorney´s office after a report from Medidom clinic where she worked, according to which that day she had tried to sedate Maradona and he had refused.

Madrid acknowledged that the report was false and that she did as ordered by her supervisor, Mariano Ariel Perroni.

Past May, ex-soccer player´s personal doctor, Leopoldo Luque and the other six indicted were called for investigation, among others with charges, there is psychiatrist Agustina Cosachov and psychologist Carlos Díaz.

The attorneys´ decision was taken after the results shed by the 11 official experts making up a medical board to determine if there was malpractice leading to Maradona´s death.

The board´s report indicates the work from the team in charge of Maradona´s health was inadequate and deficient.

Last year, on December 22, toxicological studies carried out by the Argentinian scientific police on the body of ex-soccer player who had died a month earlier, showed the inexistence of alcohol or any other drug, but investigations about an alleged medical negligence still continue.