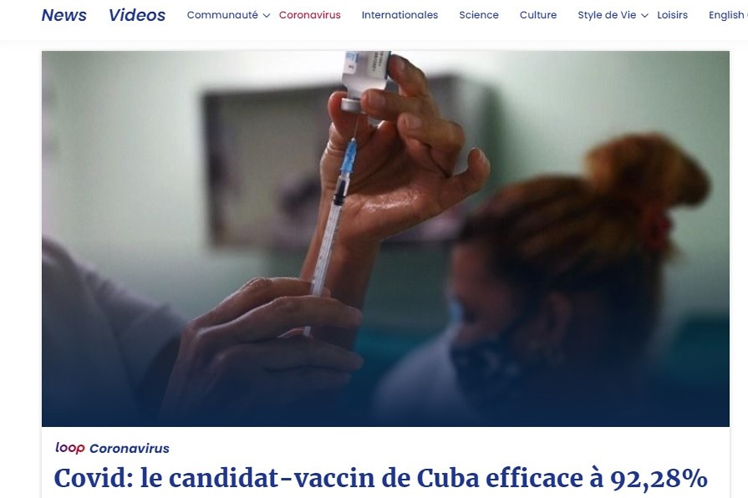 Listin Diario, the TV channel CDN and Ndigital daily published the information disclosed on Monday, only two days after Cuba announced the 62-percent effectiveness of its vaccine candidate Soberana 02, which also had an impact on this nation.

The Listin, after highlighting the achievement of Cuban science, quoted a tweet by Cuban President Miguel Diaz Cannel that goes: ‘Hit by two pandemics (Covid-19 and the US blockade), our scientists have overcome every obstacle and given us two very effective vaccines: Soberana 02 and Abdala.’

Loop Haiti digital platform underlined that the effectiveness surpasses 92 percent after the application of three doses, higher than the minimum standard set by WHO which is 50 percent.

The site also reproduced the announcement made by BioCubaFarma pharmaceutical group hoping to get the island authorities´ approval by the end of June or beginning of July, as well as the messages of encouragement from president Díaz-Canel to scientists from Finlay Institute and the Biotechnology and Genetic Engineering Center.

Loop Haiti also mentioned the 62 percent effectiveness of Cuban vaccine candidate Soberana 02, in its second dose, and underlined that the drugs take already into consideration the new variants present in the Caribbean nation.

The Haitian government expressed in the beginning of this month its interest in the island´s vaccine candidates, facing an increase in the number of infections and deaths related to Covid-19.

The minister for Communication and Culture, Pradel Henríquez, suggested Haitian authorities might authorize applying drugs produced in the Antillean island to fight the disease.