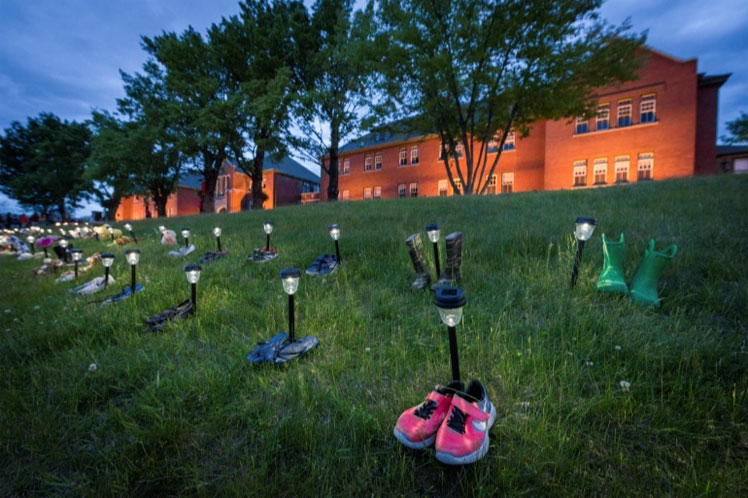 In May, the unmarked graves of 215 children were discovered by the Tk’emlups te Secwepemc First Nation at another school in British Columbia.

‘This was an incredibly harmful government policy that was Canada’s reality for many, many decades and Canadians today are horrified and ashamed of how our country behaved, from their culture and their language and forced assimilation upon them,’ Trudeau said in a statement from his cottage in Ottawa.

‘To the members of the Cowessess community and Treaty Four communities, we are sorry,’ the prime minister said. ‘It was something that we cannot undo in the past, but we can pledge ourselves every day to fix it in the present and into the future.’

Plus, Trudeau said he was open to taking necessary actions to know the truth, to ‘ensure there will be consequences for bodies, institutions and perhaps, in some cases, for people’ closely related to these children´s deaths.

Recently, local tribe Tk’emlups te Secwepemc reported that they found the remains of more than 200 children buried in Kamloops, in the southern province of British Columbia, at the right site of the largest residential school for First Nations´ people.

Regarding this discovery, Pope Francis expressed painful feelings and urged Canadian political and religious authorities to collaborate to clear up such a sad story.

Beginning in the 1820s, at the direction of the government, as many as 150,000 First Nations´ children were in some cases forcibly taken from families and put in several Christian schools, as part of an unscientific program to instill in them European culture.

A report from the Truth and Reconciliation Commission, published in 2015, reported that at least 3,200 children had passed away from abuse and neglect, and disclosed some 51 deaths in Kamloops alone from 1915 to 1963.