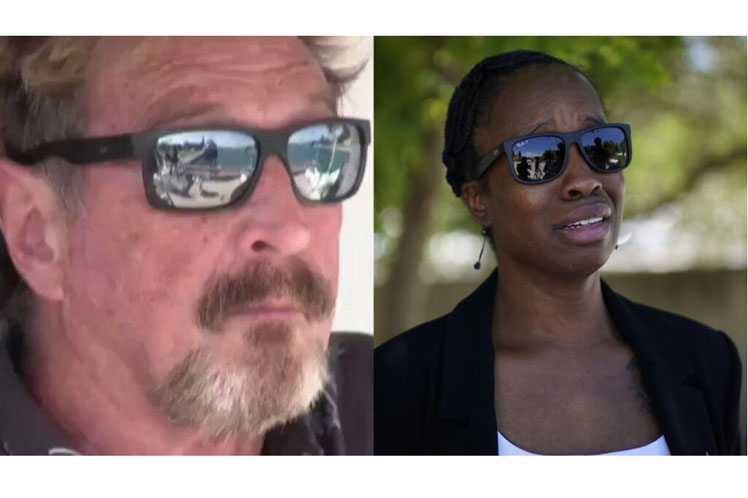 Washington, Jun 26 (Prensa Latina) The widow of U.S. software mogul John McAfee blamed U.S. authorities for his death in a Spanish prison where he was awaiting extradition to the United States and said he was not suicidal.

‘I blame the U.S. authorities for this tragedy. Because of these politically motivated charges against him, my husband is now dead,’ she said, adding that he planned to appeal against Spain’s high court ruling, published a few hours before his death that authorized his extradition on tax evasion charges.

‘His last words to me were ‘I love you and I will call you in the evening’, those words are not words of someone who is suicidal,’ she said, holding back tears.

McAfee, 75, was found dead Wednesday in the Catalan prison of Brians 2, in Sant Esteve Sesrovires, Barcelona, a few hours after the National Court of Spain ruled on Monday he should be extradited to the United States.

He was indicted in the United States on tax evasion charges (worth over $4 million) and was charged in a cryptocurrency fraud case.

McAfee’s Spanish lawyer, Javier Villalba, said Friday that the death of his client, which according to Spanish authorities could be suicide, was a surprise for his wife and other relatives.

He added that even though he had no evidence about the reason of his death, Villalba blamed the death on ‘the cruelty of the system’ for keeping a 75-year-old man behind bars for crimes not related to blood crimes after judges refused to release him on bail.

After knowing McAfee´s death for alleged suicide, many of his followers paid tribute to him, and shared a message he posted on Twitter on June 15, 2020 after his arrest and imprisonment in Barcelona, casting doubts on the cause of his death. ‘I’m happy here, I have friends, the food is good, everything is fine,’ he said, and in another tweet, posted on November 30, 2019, McAfee warned he was receiving ‘subtle messages’ from US government officials that they were going to murder him.

Meanwhile, Edward Snowden also spoke out on this incident and said Europe should not extradite those accused of non-violent crimes ‘to such an unjust judicial system, and to a prison system as cruel as that of the United States.’