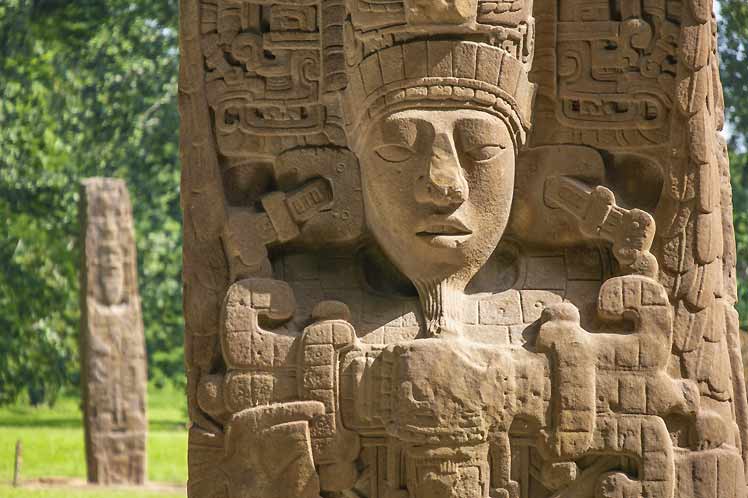 The site covers 34 hectares in the municipality of Los Amates, Izabal, and touring the site allows you to imagine a city founded on the northern bank of the Motagua River and witness its maximum splendor, between the years 426 and 810 of our era.

The story tells -still with many unknowns- its open-air Gran Plaza (300 meters from north to south by 150 meters from east to west), along with the Ceremonial and the Temple Plazas, notable for the complexity of its constructions, with pyramid systems, terraces and stairways.

Other attractions are its series of 12 stelae, among them, the E, the tallest discovered in Mesoamerica (10 meters high and 55 tons of weight), as well as hieroglyphic texts with significant dates of the calendar.

The ruins of Quiriguá are today an outstanding example and the largest body of masterpieces of Mayan art, an advanced representation of the skill of its sculptors, with a style known as ‘the school of Motagua’, highlighted Unesco representatives when granting it the title of World Heritage Site in 1981.

Its zoomorphic structures, carved in sandstone and without the use of metal tools, to honor their rulers, especially K’ak’ Tiliw Chan Yopaat were also recognized.

The park also protects a remnant of tropical rainforest and functions as an island refuge for the flora and fauna of the Motagua River valley.

This is precisely one of the greatest challenges for the preservation of the area, which is very vulnerable to flooding. As the case late last year, after the passage of storms Eta and Iota, which left extensive damage and forced its closure.

After a reconstruction, Quiriguá reopened its doors last June 18, after a total reconstruction giving Guatemalans and foreigners a new opportunity to appreciate a part of the classic Mayan era.