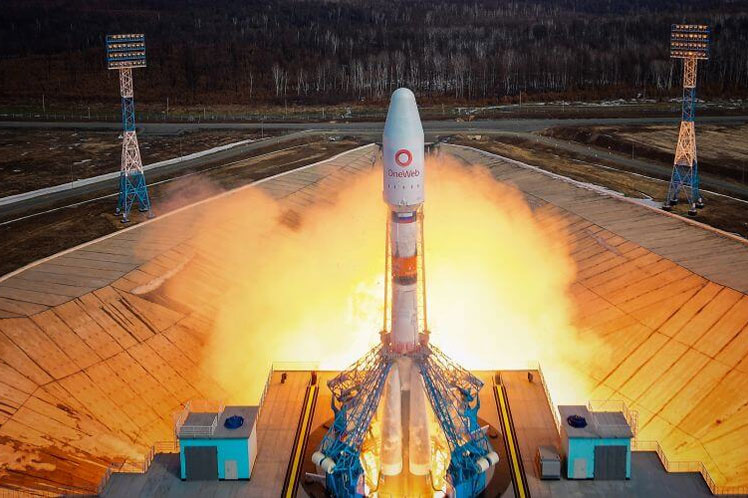 The spacecraft was launched into space from the Vostochny Cosmodrome at 15:48 local time, according to images broadcasted live by ROSCOSMOS.

The deployment of those satellites will provide high-speed communications to all regions of the planet above 50 degrees North Latitude, prompting the inscription on the spacecraft’s head, ‘Hello, North Pole.’

The first six OneWeb satellites went into orbit from the Kuru Cosmodrome on a Soyuz-ST rocket on February 28, 2019. Another 34 were launched from Baikonur on February 7, 2020, and the same number on March 21, 2020.

For the first time, OneWeb satellites were launched from the Vostochny Cosmodrome in December 2020, and further deliveries took place on March 25, April 26 and May 28, 2021.

The OneWeb deal, updated with the French Arianespace company, provides for the launch of 16 Russian Soyuz rockets from the Kuru, Vostochny and Baikonur cosmodromes in 2020-2022. Each launch will place from 34 to 36 satellites in orbit.

Owned by the British government along with Indian conglomerate Bharti, OneWeb is a satellite constellation developed with the goal of providing broadband internet services globally by the end of 2022 through a network of 650 satellites.

On Thursday, ROSCOSMOS hailed its ‘fifth fully commercial launch from the Vostochny Cosmodrome,’ which opened in 2016 in the Far East near the border with China.

Pope Francis highlights the need to listen for good communication

Pope Francis highlights the need to listen for good communication