People of San Antonio march with the president 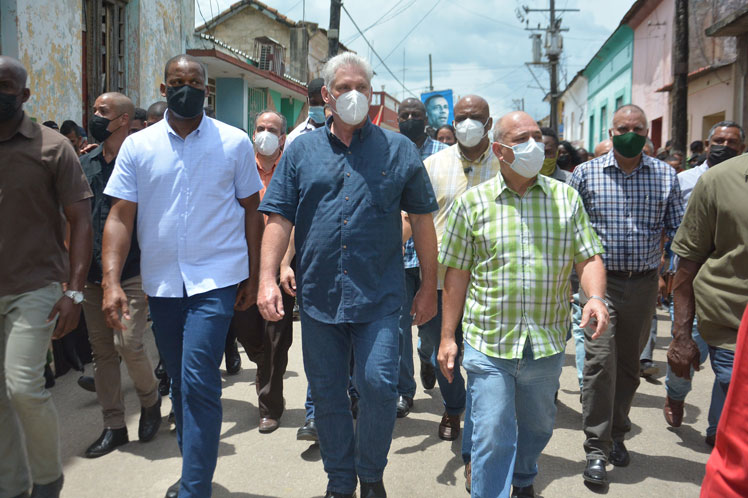 People of San Antonio march with the president

Journalist José Luis Guía, through a telephone communication, commented in a special broadcast on local television that a mass of people with Cuban flags and those of July 26, accompanied the president on a tour through the streets of that town. The head of state arrived there to exchange with the population, regarding incidents that occurred on Sunday morning, when a group of people, encouraged by campaigns originated in social networks, came to the city park with the purpose to create destabilization.

Guía said the town is currently calm, as there was an ample rejection of the actions of those influenced by the messages of those who seek to destroy the Cuban Revolution.

The reporter pointed out that it was a sea of ​​people that joined the also first secretary of the Communist Party of Cuba as soon as he arrived in San Antonio and with shouts of Long live the Revolution, long live the Party! They toured the city.

He informed that, in a serene and even-tempered way, Díaz-Canel called on the people to remain calm and not allow themselves to be provoked, and exchanged with people about their concerns.

The people, for their part, demonstrated to be aware of the difficulties the country is experiencing and of the work carried out by the government to face the Covid-19 pandemic, as well as the efforts of Cuban scientists.

In the exchange with the population, the president spoke about the vaccination campaign, which will advance despite the difficulties, and called for confidence that we will succeed.

This Sunday, in a national television appearance, the Cuban president affirmed that the streets of the country belong to the revolutionaries and added that the Government has all the will to dialogue about the true causes of the national situation.

He said that those who encourage events like those of San Antonio do not want the well-being of the people, but the privatization of health and education, neoliberalism, and said that inciting this type of disorder in the exceptional circumstances of the pandemic is cruelty. We are not going to allow any sold-out counterrevolutionary, who receives money from US agencies, to cause destabilization in Cuba, Diaz-Canel emphasized.

At the same time, he called on all communists to take to the streets in defense of the Revolution, wherever they try this type of action and confront it decisively and firmly.