President-elect spoke with comptroller about transfer in Peru 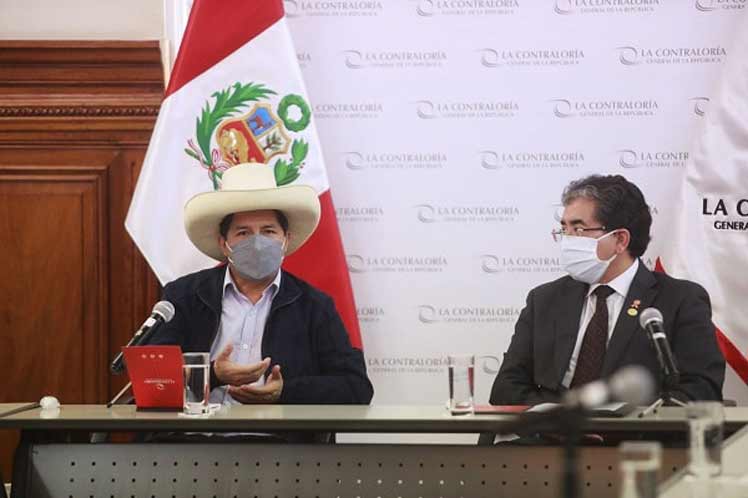 President-elect spoke with comptroller about transfer in Peru

Castillo visited the official in charge of controlling the management of State resources and did so in the company of the elected vice president, Eda Boluarte, and the lawyer for the next president, Aníbal Torres.

‘We met this morning with the Comptroller General of the Republic, Nelson Shack, to define the mechanisms for transferring government management and concrete actions to fight corruption,’ Castillo wrote on Twitter.

The dialogue preceded the meeting also scheduled for this Wednesday with President Francisco Sagasti, at the invitation of the outgoing leader to also discuss the transfer of power.

Meanwhile, expectations remain regarding the nomination of the president’s ministerial cabinet proclaimed last Monday, more than six weeks after winning the elections over neoliberal Keiko Fujimori.

In this regard, rumors and speculations circulate with names of possible appointees, along with insinuations by conservative media, political and business pressures, for Castillo to name right-wing figures or neoliberal technocrats.

The president-elect has only said in this regard that his cabinet will be made up of personalities from all sectors, technicians and people outside of politics, favorable to the new government and indicated they must maintain loyalty to the people as their main value.

Among the almost certain are progressives Pedro Francke and Hernando Cevallos as ministers of Economy and Health, respectively, and Róger Nájar, of the Peru Libre party, for which Castillo was a candidate, is repeatedly mentioned.

On the other hand, reliable sources reported that the Foreign Ministry began to receive confirmations from guests to the inauguration of Castillo, to be held on the 28th, when the bicentennial of the proclamation of independence will also be celebrated.