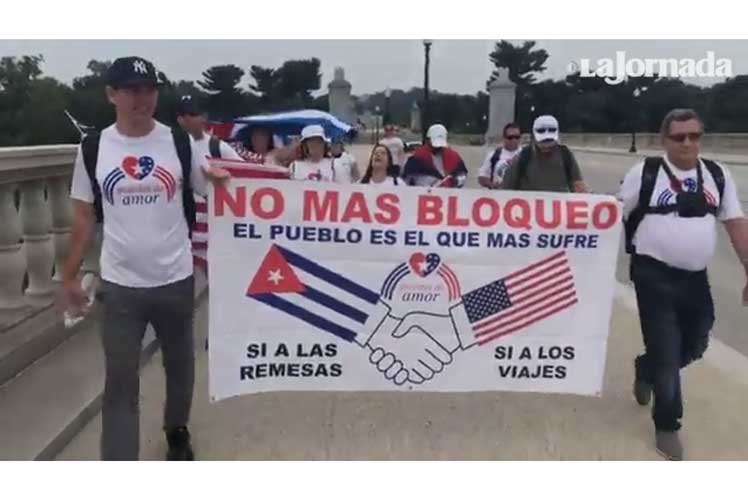 Carlos Lazo, a Cuban-American high school teacher, led the walk that culminated on Sunday in front of the White House, where together with hundreds of activists, academics and trade unionists demanded the lifting of the economic, commercial and financial sanctions imposed on Cuba, according to La Jornada.

The newspaper pointed out that with waving Cuban flags and banners against the blockade, and a large group of Cuban-Americans chanting with their allies Cuba yes, blockade no, they broke the official narrative that their policies represent the wishes of that community.

Lazo and his colleagues were welcomed at the conclusion of their pilgrimage, which began on June 27, and which at each stop promoted dialogue on the bilateral relations, the newspaper added.

He reiterated the message he issued at the beginning of his walk: 60 years of tensions between Cuba and the United States have only left us with misery, pain and resentment.

The activist, who was born in Cuba and migrated to the US in 1991, is an Iraq war veteran, later he became a teacher and a prominent promoter of the normalization of bilateral relations, introduced some speakers such as lawyer Jose Pertierra, who demanded Biden to meet his campaign promises to reactivate the policy of openness and normalization promoted by Barack Obama towards Havana. It is illegal to use hunger as a foreign policy weapon, noted the lawyer, a veteran analyst on bilateral relations with Cuba, a phrase echoed by several Mexican newspapers.

Television channels, radio stations and almost all the Mexican written press continue on Monday making reference to the importance of the event that took place in front of the White House.

Some columnists wonder if Biden will rectify his policy of maintaining the blockade in its current state and continue to support and make his own the measures that he criticized so much in his confrontation with Donald Trump during the dirty electoral campaign.