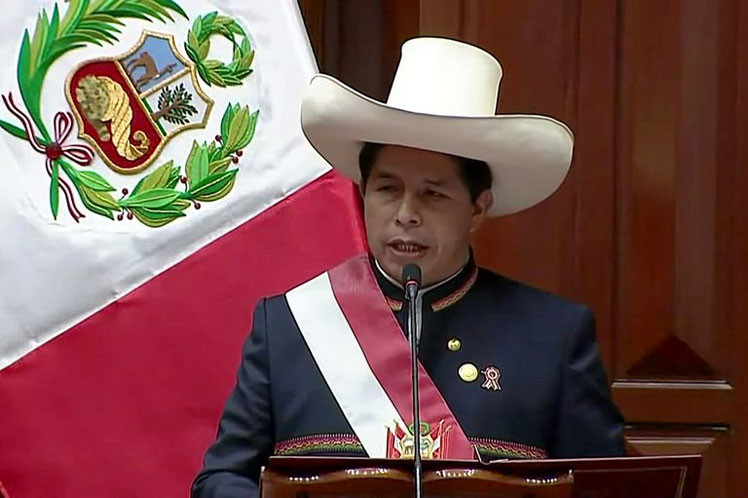 On his message to the nation, delivered to the plenary of the Congress (parliament) after being sworn in, the president also expressed his decision to close social gaps and fight inequality, and outlined his government plan for the five years of his administration.

He added that the constituent project will be adjusted to the 1993 Constitution, and will have to reconcile positions with the Congress (of conservative majority), where its viability will be approved.

Likewise, Castillo pointed out that the assembly is necessary because the current Magna Carta ‘only benefits the big corporations so that they can take our wealth in abundance.’

‘The State must be free to boost, monitor and regulate according to the interest of the majorities. We will energetically execute and respect what the people decide,’ the president added.

Castillo admitted that the current charter does not foresee a constituent assembly, nor authorizes the president to call for a referendum, and only allows constitutional reform by decision of the Congress.

The new head of State unfolded he will present to the Parliament a reform project adjusted to the current Constitution for its analysis and debate, hoping to be submitted to a referendum.

Castillo explained that the constituent will be plurinational, popular and with gender parity and composed of those elected among candidates proposed by political organizations, indigenous peoples and other social sectors.

The leader explained to be determined ‘to break with colonial symbols in order to end eradicate domination ties that have remained in force for so many years.’

The current palace, Castillo added, will be handed over to the new Ministry of Cultures ‘to be used as a museum to show our history, from its origins to the present day,’ he assured.