Mexico starts crucial consultation on the trial of former presidents 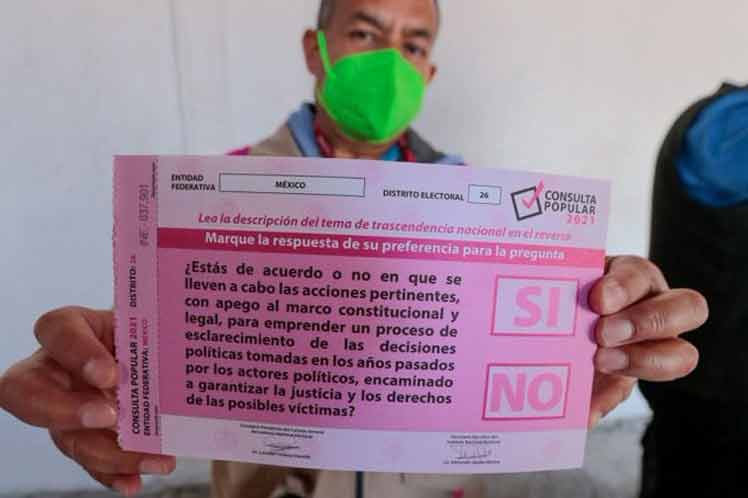 Mexico starts crucial consultation on the trial of former presidents

Mexico, Aug 1 (Prensa Latina) With honors to the flag at Zocalo's Mexico City, the country's National Electoral Institute (INE) on Sunday started the most important and silent popular consultation due to insufficient publicity and few calls to vote.

The General Council gave its traditional positioning to begin the installation of polling stations with the Morena party’s current complaint that there are few and in many domestic regions they were not even deployed.

In order for the consultation to be binding, it is necessary that 40 percent of the participating population, that is, 37.4 million Mexicans, support the Yes vote.

INE’s questioned president, Lorenzo Cordova, indicated the 93.5 million citizens will have a ballot at the 57,877 polling stations installed on Sunday, with the participation of 285,435 officials and 9,630 instructors and assistants.

The popular consultation is a direct participation mechanism through which citizens approve or reject one or several proposals previously submitted on issues of public interest.

The question to which the voter will respond is: Do you agree or disagree that the pertinent actions be carried out in accordance with the constitutional and legal framework, to undertake a clarifying process of the political decisions made in the past years by the political actors, aimed at guaranteeing justice and the rights of the possible victims?

INE unfolded that yesterday the selection of the probabilistic sample of the Quick Count for the Popular Consultation was carried out, whose aim is to provide certainty to the citizenship about the outcomes of this direct participation mechanism, by releasing them on Sunday evening.

That first consultation, carried out at the request of President Andres Manuel Lopez Obrador, is intended to allow citizens to approve or reject the implementation of actions in accordance with the legal framework, leading to the clarification of political decisions made in the past, according to INE’s jargon.

In understandable language, according to Lopez Obrador, it is about the people having the right to remove a president from office, just as they have the right to elect him/her.